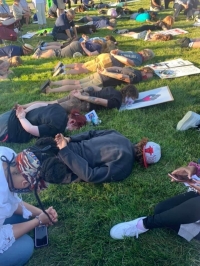 Supporters Rally for Change in Euclid, Ohio on June 11.

The following is a transcript of the speech given by Councilman Brian Moore at the rally.

Today is the day that matters. Today is the day that the clergy of Euclid come together as a united front against the “scourge of racism and its legacy of systematic violence.” We are not just here to decry the obvious, visible results of unchecked violence against our black and brown brothers, but we are here to draw a line in the sand against the real reason, the cause. My gardener friends know the secret. A weed plucked from the grown merely strengthens itself and returns stronger after you have forgotten it, but a weed destroyed at the root will not return. We are here to start the process of destroying the root, of denouncing the root, racism. Racism is the colonial system that exploited a land and created a marginalized people bound to mental slavery and second-class citizenship. A people that we have become so used to forgetting that when they do appear, they seem unreal. Where are the Native Americans?  They are lost to unrealistic treaties that our forefathers never intended to honor. Will the Africans who were taken from their land to become enslaved builders of wealth for a new nation become forgotten, just like the Native Americans? The parallels are clear. Native Americans have been forced onto reservations to contain and hide them; African American are forced into mental reservations that some are not able to escape. “I can’t.”…Mental reservations.  “I’m scared.”…Mental reservations.  “Black people don’t do that.”…Mental reservations.  “We don’t mix religion and politics.”… Mental reservations.  “It does not matter what I do.”…Mental reservations.  These state mental reservations that many of us have placed on ourselves when we agree with the puppets of the slave master that tells us in our music that we are female dogs and garden utensils and worse. We allow our children to listen to it, enjoy it, repeat it and identify with it because it has a nice beat. “I don’t hear the words. I just like the music.”…Mental reservations.

Today is the day that matters. The truth is that it was not just one “rogue” cop who murdered George Floyd. The truth is that it was an entire system that is bent to allow the idea that murder, videotaped murder, eyewitness murder is not just okay, but justified. How else could not just one, but four men who were sworn to uphold the law, do just the opposite…a public execution without fear of reprisal. The system is broken. We are the fix. We are the people. We are the solution. How? One man, one vote. Your vote matters. How? Be counted, the census ensures that there is funding for decades for your benefit and for the benefit of your offspring. How? Get involved! There are numerous of local, state and national opportunities.

We all have a story to tell. Make sure that yours matters.