Commentary on Books that Matter: The Black Swan 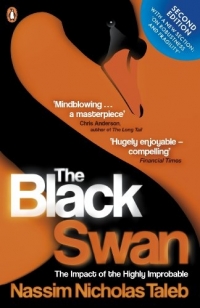 The Black Swan: The Impact of the Highly Improbable by Nassim Nicholas Taleb

In The Black Swan, written prior to financial crisis and resulting recession that began in late 2007, author Nicholas Taleb decried what he characterized as naive globalization among an increasingly smaller number of very large banks. While size and geographic diversification gave the appearance of stability, Taleb saw the creation of interlocking fragility and the threat of a global collapse. Financiers and economists were all using the same mathematical models and following the herd in their thinking. What these models and their users ignored was the potential for the phenomenon Taleb calls a Black Swan. Seemingly out of the blue, the bubble in the housing markets burst, balance sheets in the banking industry were devastated, and the world plunged into an economic crisis. A Black Swan had arrived.

The Black Swan metaphor is taken from an illustration of a philosophical problem known as the problem of induction. The problem centers on our reliance upon past experience in thinking and learning. If every swan we’ve ever seen has been white, so the illustration goes, then we can theorize that all swans are white. Additional observations of white swans seems to confirm our theory so we think of it as true - something that we know. We forget that all it takes is one observation of a non-white swan to falsify our theory however unlikely that may seem. In fact there are black swans in Australia.

Taleb believes that what is most significant in our world today is the result of Black Swans. Examples of these events run the gamut from political events (Sept. 11,) to best sellers (Harry Potter,) and new technologies (transistors and lasers). He argues that important history comes in leaps and starts that cannot be predicted. The difficulty is that we are not well suited for dealing with this reality. By nature we need explanations and we don’t like uncertainty. These tendencies make us vulnerable to two fallacies in our thinking. The narrative fallacy is the tendency to believe a story that explains what happened. We listen to experts espouse theories of causal relationships between events. We forget these stories are simplified summaries created after the fact and that “cause” in politics and economics is not the same thing as it is in physics. As a result Black Swans are virtually invisible in history and we act as if they don’t exist, to our ongoing peril.

The second major fallacy is a misunderstanding of the character of randomness in the real world. As a former successful derivatives trader Nicholas Taleb is very practical and he applies the practitioner’s perspective mercilessly. For Taleb, the key test is predictability. Uncertainties that can be described statistically with a bell-curve shaped curve, as in games of chance where the odds are known, represent a mild form of randomness. Unfortunately, we tend to think this is what the world is like. It’s what we expect and it’s the basis for all of the economic models and forecasts that consistently miss every major turning point. Game-like uncertainties average-out if we play the game long enough so we can diversify risk and expect that tomorrow won’t be that different from today. In fact, Black Swans radically change everything. They don’t average out. What is most important is to realize that Black Swans result from unknown unknowns, variables outside the mathematical models and events that are off our mental radar screens. They are events whose odds are not known or knowable. Black Swans are completely unpredictable. This is the character of the real world, wildly random, and it is becoming more so.

The Black Swan is not a comforting book. It is challenging and delivered with an in-your-face attitude. Nicholas Taleb’s heroes are among the under appreciated in their fields: Montaigne, Popper, Hayek, Berra, and Bastiat. His villains include many Nobel laureates. While it may not be comforting, The Black Swan is not without hope or wise counsel. Make decisions by realizing that we can’t know the future and acting accordingly. Focus on consequences of decisions, which you can estimate, not the probability of the outcomes, which you can’t. Invest in preparedness not prediction. As for hope - unexpected and unlikely events are not always all bad. After all, we did stumble upon penicillin and beer.

Nassim Nicholas Taleb's work has gained increasing influence in finance if not politics and economics. His other books include Fooled by Randomness, Anti-Fragile, and most recently Skin in the Game.