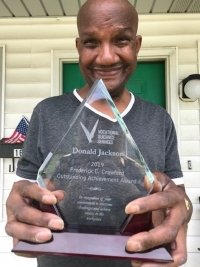 Longtime HELP resident, Mr. Donald Jackson, has a lot to be celebrating these days.  The Board of Directors at Vocational Guidance Services selected him to receive their prestigious Frederick C. Crawford Outstanding Achievement Award for his many years of hard work and dedication.

Mr. Jackson, 62, has been working at VGS since 1971 where he helps unload delivery trucks and assists with distributions.  He found a place he can contribute not only to an organization but also to the people.  “They call me ‘King of the Loading Dock’” Donald said.  “They said I’m the most dependable and hardest working in the building!  It makes me happy to know I’m doing a good job”.

Vocational Guidance Services leadership staff praised Donald’s positive attitude and said he never complains and sees each day as a blessing.  They have let him know he is welcome to work there for as long as he would like, to which he responded that he would like to work there until he’s 80!

Donald was pleasantly surprised when he received a standing ovation from the crowd and felt honored that he got to stand next to Vocational Guidance Service’s President & CEO while making his acceptance speech.  All his friends and care providers from his residential site, HELP Housing East, attended the event to support their friend and neighbor as he received this incredible honor.

Donald would especially like to thank a team of people for his award including friends, family, staff at HELP, staff at VGS and especially his co-workers.  “I couldn’t have received an award without the help of everyone around me.  Thank you all for believing in me”

On behalf of HELP staff, consumers and supporters, Congratulations Donald!