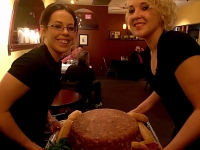 Sam & Hope with the Timpano

The 'Big Night" is a story about two immigrant brothers from Abruzzi, Italy.

On the New Jersey Shore in the 1950s, the immigrant brothers owned and operated a restaurant. The one brother, Primo played by Tony Shalhoub, is a brilliant, perfectionist chef who chafes under their few customers' expectations of "Americanized" Italian food. Their uncle's offer for them to return to Rome to help with his restaurant is growing in appeal to Primo. The younger brother, Secondo played by Stanly Tucci,  is the restaurant manager, a man enamored with the possibilities presented by their new endeavor and life in America. Despite Secondo's efforts and Primo's magnificent food, their restaurant was suffering financially.

Secondo's struggles as a businessman renders him unable to commit to his girlfriend Phyllis (Minnie Driver), and it didn't help matters any as he was having an affair with Gabriella (Isabella Rossellini), the wife of a competitor whose restaurant is located right across the street from the two brothers and whose restaurant was doing really well! Gabriella's husband's (Ian Holm) "Pascal's", restaurant was very successful despite (or perhaps due to) the mediocre, uninspired food served there. Desperate to keep his restaurant afloat, Secondo asks Pascal for a loan. Instead, Pascal, persuades Secondo, to invite the very popular Italian-American singer Louis Prima to dine at the restaurant, persuading Secondo that the celebrity jazz singer's patronage will revitalize the brothers' business.

Primo and Secondo plunge themselves into preparation for this "big night" by putting everything they have on food and inviting people (including a newspaper reporter) to join them in a magnificent feast centered around a timpano (a form of timballo, a complicated baked pasta dish baked in drum-like shaped container). The brothers pour their hearts into every dish, lavishing care and great expertise on the cooking.

As they wait for Prima and his entourage to arrive, the diners indulge in the exquisite food and partake in a fabulous celebration.

As did our diners Saturday Evening, as we re-enacted the celebration by having a five course wine tasting event!

The "Big Night" Wine Tasting Event was a 5 course dinner paired with wines thought to have been served in the movie as well.

Here's what was served at Our "Big Night" Wine Tasting Event;

Fourth Course: Timpano, what our dinners were patiently waiting to see and then enjoy. A drum-like shaped container lined with dough then filled with the most delicious flavors on earth. Rigatoni, meat sauce, meat balls, mozzarella, pecorino romano, peas, prosciutto, soprezzata then covered with dough, baked then sliced like a piece of pie and served on a bed of meat sauce. Heavenly, paired with two red wines La Maialina, Chianti Classico Riserva & Grattamacco, Toscano Rosso.

Fifth Course: Tantalizing Tiramisu (pick me up) served with a fresh raspberry sauce paired with a shot of Velenosi, Visciole.

All in all it was an amazing wine tasting event with foods and wines never served in Northern Ohio, but strategically re-enacted right here in Euclid by Mama Catena Ristorante! Heartfelt thanks go out to those of you that attended and we invite the rest of you to come to our next wine event and experience it for yourself! If you love food and wine you simply need to come!

Mention you read about us in the Euclid Observer and receive a complimentary beverage up to $7.00 (for a glass of wine) with any entree.