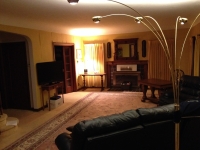 In August 2014, my girlfriend Melissa and I moved in to a house on Edgecliff that she bought from her parents after they retired to Florida. Although the location was beautiful and picturesque, the interior of the house needed work. The last time any updating took place was in the late 1970's.

About the time we were preparing to move in to the house, we saw an article on Facebook about a new TV show coming to film in Cleveland. The show, called 'Fix It and Finish It' airs locally on CBS WOIO channel 19. The show and its host, Antonio Sabato, Jr., travel the country fixing and/or finishing rooms and living spaces. (i.e. Patios, basements, kitchens, yards)

We applied via email to the producers of the show asking to have the living room updated. The wallpaper was original and a yellow/gold. Since the house was built in 1930, that meant the wallpaper was over 80 years old. The closely matching carpet was installed during the late 1970's which means it was only about 40 years old. Practically new compared to the wallpaper. The furniture in the living room was a mish-mosh of contemporary, antique and just plain awful. The thick, yellow/gold curtains, also original, could have been used in a haunted house as they blocked every speck of light from outside. They also hid the beautiful woodwork around the windows. We were in need of serious help when, almost magically, it appeared.

We were contacted in late August by the producers of the TV show. They wanted us to send in pictures and videos of the room and of the two of us. We complied. Shortly thereafter we were contacted again by the producers who advised us that they wanted to send a location scout to our house. The location scout came out in early September. His purpose is to make sure that we are real and the house exists.

As time went on, many things happened behind the scenes. Things we aren’t allowed to discuss. Seriously, we signed a legal document. Suffice to say, we felt like Dorothy looking behind the curtain in The Wizard of Oz.

Finally, to our surprise and delight, on November 10, 2014, Antonio knocked on our door. That was when the REAL fun and a very long day began. We got to see how a TV show is made. The cast and crew could not have been more friendly and thoughtful. And everybody works. Including Antonio. We helped pull carpet, wallpaper and painted some furniture. We got to see the demolition of the room, but were not around for the renovation. We were asked to leave the house while 35 strangers transformed the living room from an outdated mess, to a vibrant and awesome living space.

When we were called to return, were led into the living room with our eyes closed. Antonio announced that we could open our eyes and we could not believe the sight before us. The wallpaper was replaced with tastefully painted walls. Hardwood flooring replaced the old, ugly carpet. The windows, facing Lake Erie, were left devoid of any covering to accentuate the wood work and the view. New furniture, lamps and accessories adorned the space that, 12 hours earlier, could have been used as a dungeon. There aren't words to describe how we felt. It was like winning the lottery.

One of the best things about ‘Fix It and Finish It’ is that they use only local contractors. We are grateful to everyone involved. The designer for our episode, Robin Sweeney, owns Cosmic Girl Goes Home in Lakewood. Patsouras Home Renovations of Cleveland did the demolition and painting. The hardwood floor was installed by National Carpet Mill Outlet of Medina. The furniture and accessories were provided by Northeast Factory Direct in Eastlake. And The Wicked Chafer (thewickedchafer.com) catered the event with the most amazing food. Without these fine people we would not have the beautiful living room we have today.

What started in June with a simple email, was completed on January 26, 2015 when the show aired on CBS 19. Once the show aired, we were finally allowed to share the space with friends and family. And now, we’re sharing it with the entire city.

It was difficult keeping the secret, but it was all worth it. As a result of our good fortune, we know now more than ever, "there's no place like home."