Please do not wish me Happy Memorial Day 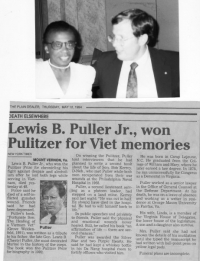 In my humble opinion, there is nothing “happy” about Memorial Day or any other memorial service or funeral. Sure, people attend cook outs and sales at stores and car dealerships. This is how for years people have celebrated the day as the unofficial start of summer. Many who are lucky enough to have jobs are “happy” to have another three-day weekend. Maybe this is acceptable to them.

What I feel we should be doing on this weekend is what is implied in the name, and that is memorializing those men and women who paid the ultimate price for our freedoms. Maybe I am a strange person; but I have never been to a happy funeral or memorial service.

Instead of going to picnics or backyard barbeques, we should be going to cemeteries or gravesites of veterans. Maybe we should be calling on the families of those who paid the price of their lives. Maybe then, we could see just how happy these families are with their losses.

There are two men I know who were killed, within the same period of time in 1968 in Viet Nam, who were special to me. One was from my hometown. We had attended the same high school. I only found out after his death, during his second tour of duty, that he had expressed an interest in getting in touch with me. I had gone off to college and he had gone off to war. One a rare visit home, a mutual friend told me of his intentions, on which he never got to act.

The other man was someone who became a quick friend during his only visit to Euclid in 1993. He was promoting his Pulitzer-winning book. I had spent a day getting to know Lewis Pullen, this decorated veteran. I do not know if the two men knew each other, or if they had ever met; but they were killed only days apart.

You might ask, how can this be? If he was killed in 1968, how could he have visited Euclid in 1993? Read his book “Fortunate Son” and you will know that he may have survived, having the lower half of his body blown away, but the man he had been was “killed” on that day. He returned home a different man, and since he has endured an existence that has been tortured by constant emotional and physical pain that he tried to eliminate with alcohol and drugs.

His actual death came by his own gun, when he committed suicide. Early the next day I was shocked awake by the television news report of his death. I intentionally did not use the word lived a tormented life, because live is not what he did after he returned (his own words) less than half the man he had been.

Strangely enough, not long before his death, I had planned to visit him in Washington, DC. I was delayed while visiting the Vietnam Memorial in Washington, trying to locate the name of my home town friend, Alvin Monday; I had promised Lew that I would stop by and say hi. I had to call him and tell him that because of my delay at the Wall, I would not have time to make that visit, as I had to make my flight. Some days, like Memorial Day, I deeply regret not paying him that visit.

So, please do not wish me happy Memorial Day. On that day I will honor the memories of both men and observe the solemn spirit of the day. Have a meaningful Memorial Day.