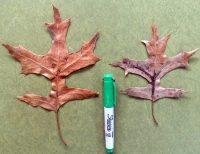 Life means struggle. Currently, CV-19 has us struggling for a new, more sustainable future; a new normal of behavior and belief. We can’t determine or foresee the future, but we know that life will be different in the wake of the virus.

Such thoughts arise as I rake the leaves of 2019 from my yard. Most of the remaining are oak, those strong enough to have resisted winter forces. In this CV-19 spring, I struggle to uplift my thoughts. Can old, dead oak leaves tell me something?

My property has pin oaks, the type with elongated maple-like leaves. But the variety of leaf shapes under my rake is striking, enough to suggest that leaves of other oak species have been blown in on winter winds. Time to consult the online tree identification guides.

In our area, oak leaves are narrow at base and expand upward and are divided into distinct lobes. Two great groups of oaks (red and white) are differentiated upon the form of leaf lobes and intervening sinuses (space between lobes). The differences result from a struggle and split millions of years ago. A new group emerged to have uniquely shaped lobes and sinuses and came to live alongside the first.

The Red Oak Group (red and pin oak species) has leaf lobes widely separated. Red group leaves appear to have as much open space as leaf surface on any given leaf. Upper lobes are canted distinctly upward. Most important, red group leaf lobes are pointed with three terminal teeth, each holding a bristled tip.

The White Oak Group (white and chestnut oak species), has more leaf lobes per leave, the lobes being smaller and more closely spaced. The leaves have a denser appearance. Most important, white group lobe tips are rounded without bristled teeth. I didn’t know of any white oaks in the neighborhood, but the distinctive leaves show that they lie to the southwest and are carried here by prevailing winds.

The leaves of some red group trees show both red and white characteristics. These have a red oak leaf lobe form (large, with upward pointed upper lobes), but white oak-like rounded tips (without bristled-teeth). These red group trees probably carry a few white oak leaf lobe genes left over from before the big split. Alternatively, they could represent a hybrid. They could be compared with modern humans who carry Neanderthal genes from a time when both species lived side by side—and occasionally mated.

Takeaway  The variety of oak leaves in my yard distills the struggle of life. Oak trees, like humans, strive to mate and reproduce within a comfortable environment. But as conditions deteriorate—as they always do—the struggle produces new ways. If a new species splits from the old, and if the split reduces stress on both species, two ‘sister’ groups may thrive. This is the story of the Red and White oaks.

Life means struggle. The pandemic, giving time in isolation, has me thinking about struggle through dead oak leaves . That is a privilege of time and effort, but not concretly productive. I better get back to raking leaves.

Roy Larick grew up in Euclid during the 1960s. He left for 30 years to become an archaeologist and work around the world. Dr. Larick returned home in 2002, bringing an archaeological perspective for comprehending local lands and waters.

In 2009, he founded Bluestone to advocate for small watersheds and landforms in the Cleveland area.

In 2020, Dr. Larick became a member of the Euclid Shade Tree Commission.