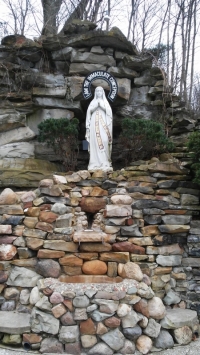 DID YOU EVER WONDER ... WHY THOUSANDS OF PILGRIMS come yearly to our “Lady of Lourdes Shrine” here in Euclid? WHAT’s its special allure? WHY and WHO reclassified it as a “National” shrine when it started as a “Local” shrine? WHY is it in Euclid? Why on that particular hillside? In other words… WHAT IS THE BACKSTORY behind our “Lourdes Shrine”? And, IS THE LEGEND TRUE? Was it built there to preserve a spot where the Virgin Mary appeared to the owner of that hillside property 150 years ago?

MONTHS OF RESEARCH INTO THOSE QUESTIONS and that legend by archivists from six different archives (led by the Euclid Historical Society) has unearthed credible evidence regarding the legendary miracle.

THE 150 YEAR-OLD MIRACLE: In 1870, the hillside rising from Euclid Ave. to Chardon Road (now Our Lady of Lourdes National Shrine) was a fledgling, 80-acre vineyard owned and cultivated by Mr. Louis and Mrs. Judith (aka, “Julia”) Harms. Already blessed with three children, Julia was pregnant with their fourth child in April, 1870. A devout Catholic, Julia prayed a rosary daily as she sat by a natural spring on the vineyard hillside. While praying on April 28th, Julia reportedly saw and heard the Blessed Virgin Mary tell her that in three days’ time Julia’s baby would be born, and soon thereafter Julia would be “called home” (pass away). This site was to be kept “precious in memory” and “sacred” -- requests Julia related to Louis, their family and friends (including local clergy and religious).

WHAT THE ARCHIVISTS’ RESEARCH REVEALED: (1) Three days later, on May 1st, Julia gave birth to a baby girl. (2) Soon thereafter, on August 12th, Julia died. Both, as the Virgin Mary reportedly had prophesied. (3) Louis Harms and others behaved as though they believed Julia’s account. Louis kept the place precious and sacred by planting evergreens, one on each side of the spot where Mary had reportedly stood. (Today, that spot is occupied by a statue of Our Lady of Lourdes, with an evergreen on each side in the Grotto. See Photo) (4) Louis told Rita Stein, the housekeeper/nanny hired to help after Julia’s passing, whose sworn account relates in detail what Louis said and did. Notably, Louis said Rita was drawn (“like other pious women”) in his experience to that very spot to pray the rosary because heaven had anointed it as precious and sacred by Mary’s appearance there. (Does that also explain the spots ongoing allure to pilgrims nationwide 150 years later?) (6) Decades before it became an official shrine, it was drawing pious people besides Rita Stein, like Cleveland’s Bishop Gilmour (on a monthly basis), Euclid’s first pastor, Rev. Anthony Martin (on a weekly basis), and Cleveland’s Good Shepherd Sisters (to regularly pray and work there). (7) So committed to keeping this site sacred were the Harms’ family and the Good Shepherd Sisters that when the vineyard was sold to developers in 1920, the parcel associated with the reported Marian apparition site was sold to the Good Shepherd Sisters. (8) The Good Shepherd Sisters officially renamed their parcel “Providence Heights” in the county plat books apparently as their public notice that this site was anointed by Divine Providence. (9) Two years later, in 1922, the Good Shepherd’s Mother Superior was visiting Lourdes, France. In the Grotto at Lourdes she says she was told in prayer to build a replica of the Lourdes Shrine Grotto on the Providence Heights site in Euclid. (10) Providentially, a Lourdes priest gave her (to use in her replica grotto here) stones upon which Our Lady of Lourdes had stood while talking to St. Bernadette there in 1858. (11) The Mother Superior returned home to build the “Local Shrine” to Our Lady of Lourdes (complete with replica grotto on the site where the Virgin Mary spoke to Julia Harms in 1870). Built and dedicated by 1926, funding for that costly grotto came about through a miraculous healing of a wealthy woman’s child according to the Mother Superior. (12) However, it was only after dedicating the “Local Shrine” in 1926 that Cleveland’s Bishop Schrembs (who had transferred from Toledo) learned in 1927 about the reported 1870 Marian apparition on that site. A diocesan investigation followed in 1927 (when Rita Stein, as well as Julia Harms’ 3 adult children were still living here). (13) The results of Bishop Schrembs’ investigation must have been confirming. In 1928, just two years after dedicating the “Local Shrine,” Bishop Schrembs rededicated Euclid’s Local shrine as “Our Lady of Lourdes National Shrine.” (14) A similar rededication of a “Local” Marian shrine in Champion, WI as a “National” shrine also occurred there only after the local bishop had concluded the alleged Marian apparition there was worthy of belief. (15) The 1928 rededication was attended by church luminaries (archbishops, bishops, etc.) from far and wide plus an estimated ten thousand pilgrims. It was no minor reclassification. (16) Perhaps most impressive was the finding that official “Ecclesiastical Approval” to circulate the “Rita Stein Account” about the Blessed Virgin Mary’s apparition to Julia Harms on Euclid’s hillside in 1870 was thereafter given (with “Nihil Obstat” and “Imprimatur”) by Archbishop Schrembs, Archbishop Hoban, and then Auxiliary Bishop Krol (later, Cardinal Archbishop of Philadelphia) in the 1930’s, 1940’s, 1950’s. Over 10,000 copies of the account were printed across three decades with that official seal of ecclesiastical approval. (17) The Trinitarian Sisters (who acquired the property from the Good Shepherd Sisters in 1952 and operate the Shrine today) continued to reference the grounds as “Providence Heights” in their printed materials. (18) They also circulated in the 1950’s “with Ecclesiastical Approval” Rita Stein’s account about Mary’s appearance to Julia Harms there as among “various apparitions of the Blessed Virgin (there) long before the Shrine came into existence.”

LEGENDARY MIRACLE RECLAIMED AND ONGOING: So, WHY WAS IT NEARLY FORGOTTEN? HOW WAS IT RECALLED? The 1960’s saw major changes in the Catholic Church, including at our Lourdes Shrine. With the Second Vatican Council (1962-65), many Catholic clergy and religious deemphasized the Virgin Mary. The Marian apparition roots of our Shrine gradually devolved through neglect from “ecclesiastically approved history” to “mere legend”. That is, until Euclid Historical Society’s archivists were asked by the Trinitarians in 2016 to explore the actual historical record regarding the “legend.” With the aid of archivists at the Cleveland Catholic Diocese, Cuyahoga County Archives, the Plain Dealer, Ottawa County, and the Good Shepherd Sisters’ archives, the Euclid Historical Society reclaimed the nearly forgotten historical record in time for April 28, 2020 --- the 150th anniversary of the miraculous event that gave rise to the ongoing miracle of Our Lady of Lourdes National Shrine. That spot/shrine/event still draw thousands of pious pilgrims to pray at the grotto on Euclid’s Providence Heights each year. In these troubled times in our world, this is good news we can all celebrate!