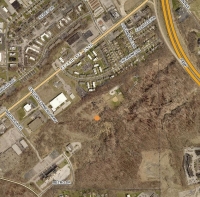 An aerial view of the currently undeveloped property now owned by Providence Baptist Church that is a potential development site by Georgia developer Active Senior Concepts.

One of the last large tracts of undeveloped property in Euclid could be home to a senior living community if a Georgia-based developer receives the support of a financing plan that includes about $45 million in public funding for the $160 million project called Celebration Village at Providence Park.   The financing plan was the topic of a joint meeting between the Euclid City Council and the Euclid School Board February 25.

The $45 million in Euclid-supported funding would occur through a development tool known as Tax Increment Financing (TIF).  TIF is a public financing method that subsidizes development projects by utilizing the increase (or increment) in property taxes to finance a portion of the overall project costs  As a result of the TIF, the County, Euclid schools or the City would not see an increase in taxes beyond what it receives from the undeveloped or underdeveloped piece of property through the duration of the TIF.   The property targeted for Celebration Village is the 68 acres south of Euclid Avenue between Hillandale Park and Euclid Medical Office Building.

Controversy surrounding the financing plan centered on its impact to Euclid Public Schools.  While the City and Schools would collect the same amount of property tax revenue as it does now, they would forego the increase in tax revenue due to increased property value of the development.

“I fully support the Celebration Village project.  It will bring a major investment to Euclid Avenue, new modern housing options for seniors, new jobs and income tax, and help to attract additional development and investment along Euclid Avenue,” said Mayor Kirsten Holzheimer Gail who supports the development project and the TIF plan.  She emphasized that in today’s market, “every project that gets done has some type of public involvement” in terms of supportive public financing.  She referenced several Euclid projects that used TIF support to make the private projects happen.

“This would bring new jobs, temporary construction jobs and would be transformative and serve as an economic stimulus to the Euclid corridor,” added Holzheimer Gail.

The fate of the development is now in the hands of the Euclid School Board and City Council who need to determine if they back the TIF.  Financing packages can vary in their level of support and length.   One of the concerns with the TIF is that it is 100% and runs for 30 years.  “We have to give a response by March 20,” said Donna Sudar, President of the Euclid School Board.

In the public comment part of the meeting, citizens were equally divided between supporters and opponents of the TIF.  During a question and answer session from both City Council and School Board members, questions focused on the inflexibility of the developer to negotiate the amount of public financing support the developer would receive.

According to Active Senior Concepts President, Paul Aase, without the support of the TIF plan, the project will not go forward.  “It has to be a 100% TIF.  Any cut would make this economically unfeasible,” said Aase.  While $120 million will be financed through private investment and bank debt, the $45 million in TIF funds are seen as critical by the development team.

If built, Celebration Village will target 55+ age seniors.  The active living retirement resort will be the first of its kind in the area.  With walkable main street style streetscape, a ‘public’ square and ample green space, the development would include 124 town home lofts, 250 apartment homes, 195 independent living villas, 60 assisted living and 30 memory care homes.  With a wellness center, aquatic center, outdoor recreation and social club, the community would be gated to ensure privacy.  The developer would also acquire the Euclid Medical Building and intends to investa $2 million into this building.

Aase said his partners have successfully launched similar projects in Georgia and saw development spread from the surrounding area to support the resident’s needs.  It’s a vision the Mayor believes can work.

The property has been the center of controversy in the past.  Purchased by Providence Baptist Church in 2003, the Church planned to build a new church with surrounding senior living homes.  While a drawn out and contentious fight ultimately led to a legal settlement that allowed Providence to move forward with their plan, the property remains unchanged as the development never happened.  The plan was so controversial at the time that a citizen’s group attempted a recall of then Mayor Bill Cervenik who reached the settlement with Providence.  Since that time, Providence continues to pay an approximately $60,000 a year tax bill on the undeveloped land.

“We’ve been trying to sell it for years,” said Rodney Maiden, Senior Pastor at Providence Church.  He said that proceeds would help renovate the Church’s current home at the Manor Center in Euclid.