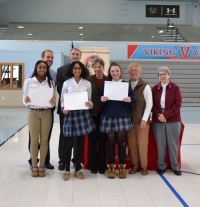 Every January, the Villa Angela-St. Joseph High School community joins together to celebrate the traditions of the school’s founders: Blessed William Joseph Chaminade, founder of the Society of Mary (Marianists), and St. Angela Merici, founder of the Ursuline Sisters. The Mass celebrates VASJ’s combined core values and unique identity.

The morning began with the bestowing of the Faces of Our Founders Awards. This is the fourth year the awards have been given out to VASJ students.

“It’s an award simply for being a good person,” said Christin VanAtta, assistant director of Campus Ministry at VASJ. “It’s designed to recognize students at VASJ who exhibit the same qualities and commitments that our founders exhibited during their time on this Earth.”

Several weeks ago, students voted during Religion classes for an individual in each grade who they think embodies certain qualities and values. From Blessed William Joseph Chaminade: a strong sense of community, mission, inclusivity and a deep love for God and Mary. From St. Angela Merici: a commitment to compassion, justice and the contemplation of their faith.

For the first time, four senior students tied for the award.

“We believe that this demonstrates the stellar nature of this current senior class and shows their general attitude toward service and a family spirit,” VanAtta said.

This year’s winners of the Faces of Our Founders Awards are:

At the conclusion of Mass, students were awarded scholarship money related to the school’s sponsoring orders. Each of the scholarships was founded in the spirit of Fr. Chaminade or St. Merici to recognize the accomplishments of current VASJ students.

In keeping with the mission of the Ursuline Sisters of Cleveland to transform society through social justice, the Ursuline Service Scholarship recognizes students who are generous in their service to the school, church and community, and leadership in issues of justice. Recipients of $500 scholarships are:

The Sr. M. Ursula Fahey Scholarship recognizes a daughter of a VA or VASJ alum who displays leadership in school, church and community. The recipient of a $500 scholarship is:

Sr. Rosemary Hocevar is a former science and math teacher and principal of Villa Angela Academy. The Sr. Rosemary Hocevar Science Scholarship is designed for current sophomore or juniors who have maintained a 2.5 GPA, have demonstrated service to school, parish and/or community, and are interested in a career in education, science or math. The recipients are selected by the family through an application process. The recipients of $1,000 scholarships are:

The Sr. Naomi Schreiner Scholarship is named after a legendary longtime VASJ Hall of Fame teacher. This $500 award is given to a senior who best represents the four characteristics of the National Honor Society: scholarship, leadership, service and character. The recipient is:

The Sr. Angela Marie Waldron Scholarship recognizes a student who has shown a love of learning, has a grade point average of at least 3.0, participates in multiple activities and is active in his/her parish. The recipient of a $500 scholarship is:

The Anna Mae Eppich-Lang Scholarship is an award in memory of Mrs. Lang. The recipient is a female resident of Cleveland who, in addition to performing well academically, has qualities that epitomize the spirit of VASJ. The recipients of $500 scholarships are:

The Fr. Louis Wiesner Scholarship was established in memory of the founding principal of St. Joseph High School. This scholarship is awarded to students who have demonstrated growth in the principles and characteristics of VASJ. The recipients of $750 scholarships are:

The Marianist Urban Students Program was founded in 1990 and came to VASJ in 1999 with the first graduating class being in 2003. Since then, more than 55 students have graduated from MUSP at VASJ. These students receive academic and social support at VASJ. The students in MUSP receive more than $10,000 in tuition scholarship aid during their four years of high school. Those chosen for this program go through a thorough and competitive selection process. Current MUSP students are: