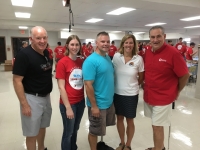 For the fifth consecutive year, the Euclid Fire Department has partnered with Lincoln Electric and the American Red Cross to conduct a Fire Safety Walk throughout various neighborhoods in the City of Euclid.  This year more than 60 volunteers from Lincoln Electric and 10 volunteers from the American Red Cross installed 328 smoke alarms into 123 homes in the Chardon Hills neighborhood.  Fire safety literature was also distributed.  VASJ President Bill Cervenik graciously offered the school’s cafeteria as a staging area for a pre-event cookout and team preparation.  Over the past five years, 1,642 smoke alarms have been installed into 613 homes.  The Euclid Fire Department installs smoke alarms free of charge into owner occupied homes year round.  Call 216-289-8402 to schedule an appointment.