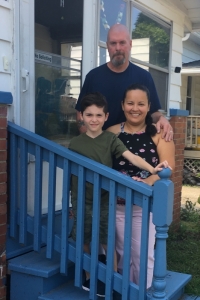 Most of us remember the attack on the Twin Towers on 9/11/2001 very vividly.  It makes us stop with our daily life and remember those who perished and the First Responders who went to their rescue. We keep in mind those who died and those who still suffer. Our country is grateful for all the sacrifices that they made and we stand together with our thanks to all who served.

I had an amazing introduction to the Fitzgerald family who moved from New York City to Euclid, OH about 2 years ago.  They have engaged our small city and residents enthusiastically.  After meeting them a few times, John and Judy Fitzgerald told me their story and I’d like to share it with you.

My interest started with a question to both John and Judy, “How did you decide to move to Euclid?’.  Judy said that they just had enough of New York City’s hustle and bustle and especially trying to dig out their car buried in snow!  They began with road trips to different states to find their new location and Euclid became the “winner”!  John replied, “I LOVE EUCLID!”

John was born in Fort Knox, Kentucky, to a Military family.  His father was a Staff Sergeant in the Army, they moved to Little Neck just outside New York City where he started 3rd grade at St. Anastasia Catholic School.   On May 3, 1988, John was sworn in as a NYC Policeman.  He has 4 children from a previous marriage, John, Thomas, Matthew, and Katie,

Judy was born in New York City and was the first USA citizen in her immediate family.  Her mother was from Ecuador and her father from Columbia. She has two sons, Rene and Ruben from a previous marriage.

John began his morning on 9/11/2001 like any other work day, getting his assignment and driving to it with his partner.  They both witnessed the 1st plane crashing into the Twin Tower and both assumed it was an accident.  The 2nd plane hit and they immediately turned around and went back to headquarters.  By 11:30am the towers were down and 30 policemen perished.  As soon as possible all policemen and fireman went to the disaster to search for survivors.  The conditions of the area were extremely dangerous and the air was full of soot and contaminating chemicals. They didn’t have any safety equipment protection for themselves.  John’s recollection was he needed to find those who were buried in all the debris, and only to realize that there was no hope.  He and others continued for 4 months searching for any possible findings to at least give to the grieving families.  The responders did not have face masks or anything else to keep what we now know is very damaging chemical exposure to all who were working there every day. Many of the First Responders have suffered serious diseases and many have died due to the disaster.

Judy became a Park Ranger and in 2006 she attended a class led by Lieutenant John Fitzgerald.  They were introduced and their relationship progressed wonderfully.  They were married and looking forward to raising a family.  Judy has been John’s hero, in their best and worst times. Her dedication to him has been a Godsend in many respects.  In December, 2009, two months before Robert was born, John suffered a stroke and was in a coma for three days.  Through many tough months, he made amazing progress thanks to his Doctors, Nurses, and Therapists and of course his wife!  Could this be a result of his exposure?  The doctor’s could not say.

So life goes on.  They were living in an apartment in New York City and realized they would like to move somewhere else.  They decided to visit different states for vacations and lucky for us they fell in love with our City which started the house hunt.  The wonderful feeling of owning a home, and enjoying “The Best Location in Nation”, gave them a new lease on life. A few days after moving into their new house, they found out he had a tumor on his kidney.  They experienced the excellent healthcare here in the Cleveland area; they were able to remove the tumor without any damage to the kidney.  The doctors said the area of his cancerous tumor was the best place it could be for a good result and they all agreed that this was caused by his exposure from 9/11 – 12/11.

This story about John and Judy Fitzgerald is just one of the many stories by 9/11 First Responders .  If you have the pleasure of meeting your new neighbors, please give them a warm welcome to our city, they would be very pleased.

I enjoy your newspaper and would like to contribute an article now and then.