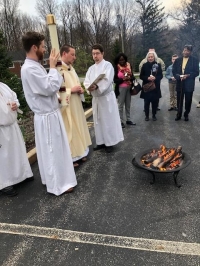 St. John of the Cross marked the beginning of Easter with its Easter Vigil Mass Saturday evening, April 20.  The first part of the vigil included the blessing of fire and the preparation of the paschal candle. Following the singing of the Easter Proclamation, the second part of the vigil featured readings from the Old and New Testament. The Baptismal Liturgy followed the homily in which two new members were received into the Catholic Church. The final part of the vigil was the Liturgy of the Eucharist where the newly baptized received the Lord in the Eucharist for the first time.

office manager at st. john of the cross parish

Read More on St. John of the Cross