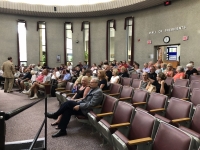 A large crowd of interested citizens were on hand to voice their opinions and hear how council would handle the funding plan for the Euclid lakefront development.

With a vote of 5-2, Euclid’s City Council approved a financing plan for Phase II of the Waterfront Improvements Plan that has been in development for several years.  The plan will create a public walkway along the lakeshore from the pier at Sims Park to East 242nd Street.

While the vote in favor of the multi-million dollar funding plan including $2 million in financing by the City was supported by most of the council, there was plenty of opposition at the council meeting August 6.  A crowded council chamber heard from numerous Euclid residents who either voiced support for the plan, or decried the spending of public funds for the benefit of a few.  A majority of those taking the podium were opposed to the plan.  Madeline Scarniech, a former council person said, “I voted for the plan (when on council), but now I don’t know where we are going to get the money for it.”  Several people echoed her sentiments.

One of the more vocal residents to voice their displeasure with the plan was former Mayoral candidate, Marcus Epps.  Epps hinted that current Mayor Kirsten Holzheimer-Gail was using the waterfront plan as a way to kick off her reelection campaign.  Epps went on to claim that the new lakefront path did not even connect to the fishing pier at Sims Park.  This statement was incorrect as was pointed out by the public plan presented by the administration at the meeting and through architectural renderings previously made available showing that Sims Park will be the start of the path.

In spite of the numerous comments by a variety of residents opposing the funding plan, several speakers took the podium to support moving forward.  These included personal appearances by State Senator Kenny Yuko (D – District 25) and State Representative Kent Smith (D-District 8).  Also on hand to voice his support was Doug Price, the owner of K&D, one of northeast Ohio’s largest apartment owners and developers.  K&D bought the apartment complex, now called Waters Edge, on the eastern end of the proposed path years ago in hopes of seeing this type of development take place.  In fact, Councilman Daryl Langman (Ward 7) recounted for the audience the many years of planning that had taken place with regards to the lakefront development plan.

Efforts to support lakefront development in Euclid went back as far as George V. Voinovich, a onetime State Representative of the area who later served as Governor and US Senator for Ohio, proposing a marina back in the 1960s.  With several Euclid mayoral administrations trying to shepherd some type of lakefront plan through, the goal of lakefront development in Euclid had proven elusive.  According to officials, it took years of planning and negotiating to get to this stage, with 88 property owners agreeing to allow for a public walkway on their lakefront property.  In exchange for their agreement, the development plan will provide buffering against erosion for the length of the path.

“This project is about opening up the lake and utilizing our greatest asset to move our City forward.  This is not a trail to benefit those who live there, but to attract people to Euclid so they can use the lakefront," said Holzheimer-Gail.

Only seven council members voted on the legislation to move forward with Phase II of the plan.  Council President Charlene Mancuso abstained and Brian Moore was not at the meeting.  Voting against the plan were Stephana Caviness (Ward 1) and Laura Groshe (Ward 8).  Groshe said, “I’m not sure I can support either one of these (pieces of legislation) even though I agree that this plan is needed.”   In a brief but pointed comment, Taneika Hill (Ward 3) questioned why council was even debating the long discussed plan, pleading with her colleagues to pass the legislation. “Let’s not let this go through our hands again," said Hill.

A groundbreaking ceremony will be held Thursday, September 6 at 5:30 PM on the fishing pier in Sims Park with work starting this fall.  For more information about Euclid’s Waterfront Improvement Plan, visit http://www.cityofeuclid.com/uploads/CSED/Waterfront/180801LakefrontFlyer.pdf.