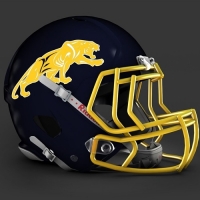 In an amazing performance on a football Friday night in late September, Euclid High running back Ron Lee electrified the crowd at Spark DiBiasio stadium when he rushed for 309 yards as the Panthers chalked up a 54-28 victory over Elyria. The triumph boosted Euclid's record to 4-1 with five games left in the regular season.

In addition to his incredible yardage total, Lee scored three touchdowns in the first half alone - including an 87-yard scamper.

Indeed, Coach Jeff Rotsky was more than pleased, although perhaps not overly surprised. All along, he realized that Ron Lee was a highly talented player with great potential, in addition to being a fine young man. "What is truly great about him," the coach stressed, "is that he's one of the most humble and decent kids you're ever going to meet."

As to Lee's football skill set, Rotsky describes him as "the complete back."

In addition to being an offensive dynamo with the ball under his arm, Lee also helps his teammates to shine, the coach notes. "On the third play of the game, on a pitch to our slotback, he raced downfield and pancaked the Elyria safety. He does all the little things it takes to be a complete back."

In early October, after the Panthers' new football staium opens, it's a safe bet the Ron Lee's growing reputation will help attract sizeable crowds. Varsity games will move to the new field, while DiBiasio Stadium will still be used for junior varsity contests and other athletic events. In addition, a new turf field near the new stadium is being created for use by the soccer team.

The Panther gridders were scheduled to play at Strongsville the last weekend in September. The final four regular season contests begin with home games against Solon and Brunswick, followed by an away game against long-standing rival Mentor, and a home game against Shaker Heights which will end the regular season.

Then, hopefully, Euclid fans can look forward to an exciting march through the year-end playoffs.