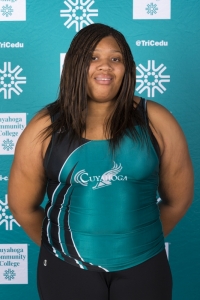 Harris placed third in the shot put with a throw of 48 feet, 11.75 inches at the championships, held March 3-4 in Kansas. The performance capped a season where the sophomore from Euclid extended her school record in the event multiple times.

Last year, she placed fifth in the shot put to earn All-American honors at the indoor finals.

“Rashida has worked and worked to become the best thrower that this College has ever seen,” said Don Cox, longtime coach of the track team. “She continues to amaze with what she can do.”

Harris also finished 18th at the national championships in the 20-pound weight throw with a heave of 47 feet, 2.5 inches. She set the school record in the event earlier in the indoor track season.

In addition to Harris, Tri-C’s Amber Ruiz-Bueno left nationals as an All-American. The record-setting sophomore from Willowick finished fourth in the 1,000-meter run and sixth in the 600-meter run.

Ruiz-Bueno became the College’s first track athlete to earn All-American honors in two individual events while competing at the finals.

As a team, Tri-C finished 15th at the national championships.