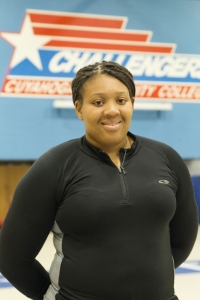 Harris placed third in the shot put with a throw of 50 feet, 1.75 inches, which set a new Tri-C record. The freshman from Euclid is the first shot putter at the College to surpass the 50-foot mark.

Earlier this year, Harris earned All-American honors in shot put at the NJCAA Indoor Track and Field Championships. She placed fifth at indoors with a throw of 48 feet, 1.25 inches.

“Rashida is unbelievably strong,” said Don Cox, the College’s longtime track coach. “When you add in the fact that she may be one of the most coachable athletes we’ve had at Tri-C, you understand why she’s so successful.”

Harris also placed 11th in discus at nationals with a personal-best throw of 134 feet, 6 inches.

Five other Tri-C student-athletes also competed at the outdoor championships, including: