Snow Plow Blades Used by 38 States Made in Euclid 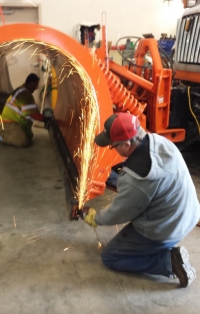 Ironhawk Industrial is a manufacturer and distributor of high-tech snow removal products made in The United States. The company came to Euclid in 2012 and has enjoyed a great relationship with the city and the local business community. After the company started in late 2010, the owners looked for a location that provided expandable space, access to major interstate shipping routes and the right business environment.

Euclid is a community that is interested in growing economically. The mayor personally returned the owner’s initial inquiry call, and the Economic Development Director Jonathan Holody has visited their offices several times to assist them with getting to know the resources available in Euclid. The infrastructure investment and landscaping on E. 222nd Street has been a real plus, along with responsive city services.

Ironhawk makes high-tech blades and cutting edges that are used in 38 state departments of transportation for plowing and road repair. Ironhawk also serves most of the municipalities in Northeast Ohio where clearing roads during the snow season is important to serving their residents and businesses.

During the last five years, the company has acquired two additional snow-related companies: Safety Source, run by General Manager Pat Gavin, and Elkin, run by General Manager Eric Fox.  The company continues to grow in both locations fueled in part by a strategy of purchasing raw materials, including carbide (second only in hardness to diamonds), and manufacturing its flagship products entirely in the U.S. All of its competitors import their carbide from China. Ironhawk has been able to secure a valuable partnership with Kennametal for domestic carbide and offer its products at a lower cost than the imported competition.

Its customers also have access to the industry’s best technical expertise. Ron Abramczyk, a five-year Ironhawk employee, came from a local competitor and has 20 years of industry experience. Mike Sparks joined Ironhawk after 30 plus years with Bucyrus Blades located in Central Ohio. Elizabeth Dellinger comes from a major Cleveland law firm background as a partner and also serves as chief operating officer. Rebecca Schaltenbrand is an attorney who practiced municipal law prior to joining Ironhawk. Together, they ensure that Ironhawk is in compliance with all state policies and regulations.

The Euclid team is rounded out with Sales Manager Brad Toth, Karen Ryan as Inside Sales and Bev Franczyk at the front desk. Customers appreciate the fact that their orders are filled quickly by this team and that each order gets a follow-up call to ensure that it is correct -- not an easy task given there are hundreds of plow configurations and thousands of part numbers the areas the company serves.

Currently, the team is working on testing two additional products made solely in the U.S. Solving customers’ problems and saving snow removal dollars drive the company’s growth. The high-tech blades last longer than traditional blades and help reduce the cost of salt, by far the largest costs in snow removal. The better the blade, the better the snow cleaning, so the need for additional salt is diminished.