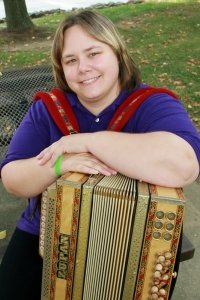 Patty Candela leads Patty C and the Guys, the Polka Hall of Fame button box band of the year, at the Super Button Box Bash at the Slovenian Society Home in Euclid, Sunday, April 10, 2016.

The accordion stars come out to shine at the 34th annual Super Button Box Bash on Sunday, April 10, 2016. Thrill to top talents, such as Polka Hall of Famer Eddie Rodick, button box musician of the year Kathy Hlad, and band of the year Patty C and the Guys. You can enjoy more than sixty accordions, plus jam sessions throughout the day at the Slovenian Society Home, 20713 Recher Avenue, in Euclid, Ohio, from 1:00 to 9:00 p.m.

Joseph Valencic is President of the National Cleveland-Style Polka Hall of Fame and Museum in the historic, old Euclid City Hall on East 222nd Street.