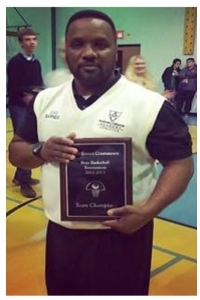 New Day Academy is pleased to announce that Coach Nate Barnes has brought his talents to our organization as the new head coach of the Varsity Boys’ Basketball team. Coach Barnes comes to NDA with extensive basketball experience and knowledge accompanied with an amazing winning and can do attitude! Barnes has served on the coaching staff of some great organizations such as: Lakeland Community College, Baldwin-Wallace College and Villa Angela St Joseph High School.

We're excited to add Coach Barnes to our program and our team here at New Day Academy. In the past 10 years Coach Barnes has led his high school teams to a combined record of 167-24. In his tenure at Andrews Osborne Academy, Coach Barnes led his team to three consecutive Lake Effect Conference Championships (2013-2015). In the 2013-2014 season Barnes was awarded the Lake Effect Conference Coach of The Year. Coach Barnes has also mentored 20+ AAU teams at various levels from grades 6 to 11 during the off-season. Currently nine of Coach Barnes former student athletes are playing basketball at the collegiate level.

Here at New Day Academy the boys basketball team has seen success in the past under different leadership, we feel Coach Barnes is the missing piece to the puzzle that we have needed for many years to take our program to the next level. We are excited about the future with our new head coach and what it means to have a person in this position that is dedicated and passionate about seeing each kid succeed on and off the court. With Barnes having sent over 20 students to college, he is a strong believer that you have to win in the classroom before you can on the court.

Nate Barnes is a phenomenal coach and we at New Day Academy cannot wait to see what the future holds under his guidance, not only for our boys’ basketball team but also for our entire athletic program. Be on the lookout this season for our Eagles. Let’s Go Eagles!