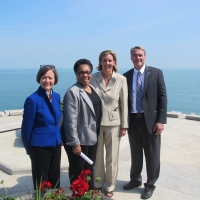 On June 6, the U.S. Environmental Protection Agency (EPA) awarded the city of Euclid two Great Lakes Restoration Initiative (GLRI) Shoreline Cities grants to improve Lake Erie water quality. I was proud to join representatives from Northern Ohio communities and the EPA on this day to recognize the city of Euclid for their efforts.

Totaling $174,206, the grants will fund Euclid projects to stop untreated storm water run-off into Lake Erie. Euclid is one of only a few midsize cities to receive two green infrastructure grants this year. Northern Ohio cities of Mentor and Sandusky were also awarded grants.

More specifically, the grants will be used to construct rain gardens and bioswales in Sims Park as well as bioretention ponds and porous concrete in Euclid’s municipal parking lot.  Together, these projects will prevent 603,000 gallons of untreated storm water run-off from entering Lake Erie each year.

The GLRI was created by President Barack Obama to protect the largest fresh water system in the world.  Last year the EPA awarded GLRI funding to shoreline cities for the specific purpose of improving local lake water quality. This year, the EPA has once again used Shoreline Cities grant funding to protect lakes against flooding.

I thank the EPA for recognizing Euclid’s leadership and for believing in the potential of smaller cities to make big changes.  Eleven million people depend on the Great Lakes for clean drinking water each year.  What happens in one part of Lake Erie affects everyone, making initiatives to protect the health of our lake deeply important.

All shoreline cities share the responsibility to take care of our natural resource for future generations. Congratulations to the city of Euclid and all other Northern Ohio cities who received a grant.  Our great lakes are a national treasure, and preservation is of the upmost importance.

Congresswoman Marcia L. Fudge represents the people of the Eleventh Congressional District of Ohio. She was first elected in 2008.