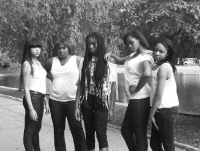 New Day Academy students are proud to be participating in the 2014 Best of the Best Fashion Face-Off and Prom Expo. The annual event is a city-wide high school fashion competition with a grand prize of $1,000 awarded to the winning school. Beginning in 1997, the competition, which is open to both males and females, enables students to raise money for their prom, as well as show off their fashion style. The competition has previously brought together hundreds of students throughout the Cleveland and Akron areas.

While the final competition is not until March 2014, New Day Academy students have assembled as early as October to decide on a theme, select music, and the clothing that will be modeled. More than modeling, however, New Day students are learning the importance of teamwork, organization, and how to prepare for large scale events. Henderson Deal, the advisor for NDA’s team, had the New Day Academy models  first walk the runway at NDA’s YOU-nity Fest in June, an event that allowed the community at-large to view what NDA has to offer.

I am a proud supporter and employee of New Day Academy, a tuition-free, K thru 12 Community School located in the Shore Cultural Center in Euclid, Ohio. We have been preparing children to become leaders in their community for over 10 years. Why? NDA believes that every child deserves access to a world-class education - one which opens doors of opportunity for a lifetime!