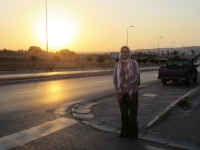 Euclid resident and Baldwin Walace University student Elise Wallis in Sidi Bou Said, Tunisia where she is living over the summer on a highly competitive Critical Language Scholarship from the U.S. State Department.

Elise Wallis is spending the summer far from her hometown of Euclid. The rising senior at Baldwin Wallace University is in in Tunisia mastering Arabic on a highly competitive Critical Language Scholarship from the U.S. Department of State. Wallis was among 631 students selected from more than 5,200 student applicants, “which places the Critical Language Scholarship among some of the most competitive scholarship competitions in the United States,” according to the program website.

“I have Arabic lessons four hours each day, which includes three hours of Modern Standard Arabic and one hour Tunisian dialect,” Wallis reported. “The program is slightly more hours of classroom study than a student would receive in an academic year of Arabic at a university in the U.S.”

“Being chosen for this competitive program is a wonderful honor and opportunity for Elise who will be one of the first students to graduate with a minor in BW’s new National Security track in International Studies next spring,” said Judy Krutky, Professor of Political Science and International Studies.

A typical day for Elise consists of waking up at 6 a.m., studying while eating breakfast, walking to school (about ten minutes from her host family’s home), taking Arabic class from 8:30 a.m. -1 p.m., then eating lunch, tutoring, and speaking practice in the afternoon until 4 p.m., and homework from 5 p.m. until midnight.

“While the academic facet of the program is quite demanding, the CLS faculty and staff really make learning the language both engaging and enjoyable,” Wallis said. Both Wallis and her BW professor agree that the diligence will pay dividends.

“By studying in Tunisia Elise will learn the language and culture of the country and will better understand the thinking of the people who started the popular demonstrations which marked the Arab Spring,” Krutky said. “This provides excellent preparation for graduate school or government services in a variety of areas.”

After two weeks managing the rigorous study schedule, Wallis is still enthusiastic about Tunisia and the program. “I love it here!” she said.

Baldwin Wallace University, founded in 1845, was one of the first colleges to admit students without regard to race or gender. An independent, coeducational institution of 4,500 students, B-W offers coursework in the liberal arts tradition in more than 50 academic areas. Located in Berea, 12 miles from downtown Cleveland, B-W provides students the cultural, educational and business advantages of a major metropolitan area.