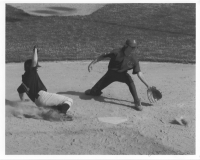 In this 2008 game, the pitcher from Admiral Merchants tries to tag a player from JTS after an overthrow at home plate.

The Euclid Pony Baseball League has recently begun their 2012 signups for the upcoming season. The league is now open to signups for thirteen and fourteen year old players who wish to participate in a Euclid-centric baseball program. Since 1951, the pony organization has played at the Bud Davison Memorial Field at Euclid's Memorial Park, and looks to continue the traditions of the organization this year.

"Euclid Pony has undergone many changes over the years", says Dan Pado, EPL Commissioner. Indeed, times have changed since the days of wool uniforms and wooden bats. Even the training of umpires has changed to reflect newer standards, based on Ohio high school rules.  Today, the league continues to adapt based on those Ohio standards.

The league will begin play in the first week of June, and play through July. Yet signups must begin now to give the league the opportunity to draft and assign players. "Any thirteen or fourteen year old player can sign up, by coming to our open registrations", Mr. Pado continued. Adding "We know families have busy lives. For the first time, we have posted our registration forms online for parents to download and bring to registration. And we are always ready to speak with the parents to make the registration process quick and easy."

Euclid Pony League has also recognized that it must also add value for the families as well. This year, Euclid Pony has reduced the registration fee for 2012. Euclid residents can signup for a fee of $100, with the non-resident fee set at $125. Registrations are held every Monday & Tuesday at the Euclid Public Library from 7:00PM until 8:30PM from now until March 27th.  For more information, surf to the EPL website at www.euclidpony.org or contact the league commissioner, Mr. Dan Pado at 216-486-4720.  The league can also be contacted via email at euclidpony@gmail.com