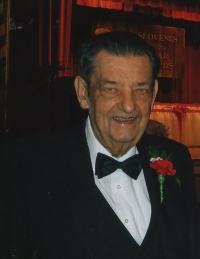 It takes a special man to be selected as the Slovenian Workman’s Home Man of the Year. Fred Nevar has been honored as this year's recipient for his tireless work to preserve the Slovenian heritage and for his involvement in fraternal, civic and veterans' organizations.

Nevar was born on East 70th and St. Clair to Russian and Polish immigrants, William and Katherine (Wawrenuk). The family moved to a home on East 239th Street when Nevar was 2, and he has lived in Euclid ever since. His only sibling is Arthur, who resides in Chardon. Nevar is proud of his family of two sons, Don and Nevar (Kay), stepdaughter Pam (Paul) and three grandchildren Dennis, Derek (Ann) and Dayna.

Nevar has fond memories of growing up in the area.  He attended Noble Grade School and after graduating with the Shore High School Class of 1942, he enrolled in Case Western Reserve University.  Going against his parents' wishes, he joined his friends as they enlisted in the military during World War II even though, being a college student at the time, he could have avoided the war by taking advantage of a deferment.

Nevar served in the U.S Army's military intelligence unit.  He studied Russian at Indiana University to become a translator.  He was then shipped to Asia to work with General McArthur’s unit in Tokyo. While there, he attended shows at the Emperor’s palace.  It was there that he rode a horse for the first time and he’s never forgotten the pain that three-hour ride caused! Another memorable moment of that assignment was playing volleyball against the Russians at the Russian Embassy, a highlight being having a photo of him spiking a ball published in Stars and Stripes, a military newspaper that was distributed world-wide. After completing two years in the Army, he returned to Case and earned his mechanical engineering degree in 1948.

After college, Nevar worked for several local companies before joining the Zagar Corporation located in Euclid and retired after 45 years at the age of 72. He enjoyed his engineering career and relished the stories he would tell his friends about the jobs he engineered or sold to customers in the U.S., Canada, and Europe.  His work involved equipment that drilled holes for items such as ceiling tiles, airplane engines, pianos, cameras, wheels, chairs, irons, etc.

Nevar has also enjoyed his career as a professional volunteer.  He became an active member of the Euclid Veterans Club in the 1940s. He was the chairman of the first Blue Babies benefit, and his efforts led to a sizable donation to the cause. Another memorable event was being in charge of the Miss Euclid contest. He still boasts that more prizes were given to the Miss Euclid than the Miss Ohio. Most people in the Cleveland area remember the huge Euclid Vets Festivals, which were initially held in the parking lot of the Slovenian Society Home, nicknamed, “Recher,” and later moved to East 260th Street, between St. Clair and Euclid avenues. Nevar was always involved with those festivals. Nevar was also the chairman of the Euclid Vets Steak Roasts, which were held annually at the SNPJ Farm and enjoyed by over 600 people each year.  SNPJ stands for Slovenska Narodna Podporna Jednota and is translated "Slovene National Benefits Association." These events enabled the club to make donations to such worthy recipients as the Brecksville Veterans Affairs Medical Center, Euclid Boys League, Euclid High School Reserve Officers Training Corps (ROTC), Mary Mavec Opportunity School and many more. For all of his volunteerism, he was presented the Lifetime Membership Award in 1964.

Nevar also belongs to the American Legion Post #343 and the Veterans of Foreign Wars (VFW) #4358, of which he is a charter member, and the Euclid Lions Club, where he was recently named their “Unsung Hero” for all he has done for the club’s fundraisers to help the visually and hearing impaired.

SNJP Lodge #158, nicknamed, "Loyalties," is another of Nevar's long-term fraternal organizations. He enjoyed traveling to different states for bowling, golf and balina tournaments through the years.  Balina is the only sport he still plays. He and his Pennsylvania-born wife, Pat, also enjoy the friendships they’ve made as members of the Keystone Social Club.

Nevar is not only a pro at volunteering, but he is also talented and well-travelled. Until the Jadran Singing Society disbanded a few years ago, Nevar traveled with them around Slovenia as a bass singer.  Nevar's lifetime of travels sum up to having visited every state, except Alaska, and 20 different countries.  Some of his favorite trips include travel to Russia and Poland, many trips to Mexico, and a 30-day trip to China.

About 20 years ago, Nevar’s friends convinced him to purchase Slovenian Workman’s Home stock, which made him eligible to be elected to the board of directors, on which he served several terms. While he no longer serves as a director, Nevar can always be counted on to help in some way with the hall events - working behind the scenes, assisting with mailings, peeling onions and potatoes, shopping, or selling tickets at events.