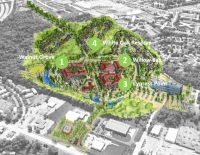 The proposed development Celebration Village sits in limbo after the Euclid School Board rejected the financing plan.

The Euclid School Board rejected the request for a 30 year Tax Increment Financing (TIF) plan to support the proposed Celebration Village at Providence Park.  The 4-0 vote effectively puts the project on hold as any progress forward is dependent on the approval of the School Board due to the financing plan (TIF) proposed by the developer, Active Senior Concepts.

In a statement issued by School Board President Donna Sudar following the vote, the Board said: “The Community must understand that it is not the role of the Board to be involved in Community Development however the loss of property tax revenue to the District resulting from the City-negotiated 30-year 100% TIF is not acceptable and cannot be agreed upon by the Board under those terms.”  The statement also said “the Development site will require public subsidy at some level and (the Board) is willing to negotiate compensation arrangements that are mutually agreeable and beneficial to the School District and City.”

When asked about the future of the development, Mayor Kirsten Holzheimer-Gail said “I don’t think it’s dead.  I still think the project is worth pursing, but the Schools are in the driver’s seat right now.”  A supporter of the development, Holzheimer-Gail added that the developer may be open to negotiation and are still interested in moving forward.  While no formal talks have been scheduled, the Mayor is attempting to bring the parties together for further discussion as the developer may be interested in a counter proposal from the School Board.

While Covid-19 has impacted many parts of the economy, Mayor Gail thought the developer was still interested in the 68 acres targeted for Celebration Village, which is located south of Euclid Avenue between Hillandale Park and the Euclid Medical Office Building.