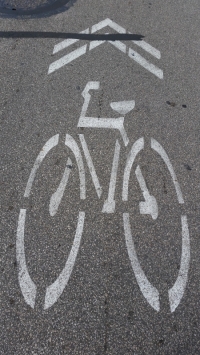 This is the fourth and final article in a series intended to increase awareness about local bike laws so that travelling around town can be safe and peaceful for cyclists and motorists alike.

SHARROWS - There is a new-ish road marking you see more and more called a “Sharrow” (PICTURED).  They cause some confusion because people aren’t sure what to do when they see one. This is because . . . wait for it . . . no special rules apply to bikes or cars when a Sharrow is painted on the pavement!  Treat it like a normal lane. They are there to mark bike routes as a convenience for a cyclist who aims to follow a set route. There doesn’t have to be s Sharrow, or any other bike symbol, for a bike to be allowed to ride on a road.  The only roads a bike can’t ride on in Ohio are freeways and limited-access highways.

Cars are allowed to ride in lanes marked with Sharrows, too.  That is literally why they’re called “Sharrows”! (“Share” + “arrows” = “Sharrows”.)  They serve as an alert to cars that there may be extra bike traffic on that particular road and as a reminder that they will have to share the road if they come upon a bike.  As we have discussed, this is something cars must do on any road whether a Sharrow is painted on the pavement or not. As we have also discussed, sharing the road does not necessarily mean sharing the lane.  A cyclist is often entitled to occupy the entire lane it is in.  If you want to pass a bike, make sure you give it the 3 feet of clearance required by state law.

To conclude this series, I would like to emphasize the following takeaways:

ABIDE BY TRAFFIC LAWS – They are for everyone’s protection.  Ohio, for the most part, has laws that keep a reasonable balance between the needs of cars and bikes.  Trust the system!

BE COURTEOUS – Follow the Golden Rule.  If you are driving a car, don’t give law-abiding cyclists a hard time.  That could be you one day, or someone you care about. If you are riding your bike, BE a law-abiding cyclist.  Also, try to be as predictable and communicative as possible. Most drivers are happy to cooperate, but they are not mind-readers.  Your fellow bike-riders would be happier with you, too.

CONSIDER SUPPORTING LOCAL EFFORTS TO EXPAND THE AVAILABILITY OF PROTECTED BIKEWAYS - Ideally, we will work towards improving our infrastructure. Anything we do to make alternative forms of transportation safer and more enjoyable also helps us meet modern expectations for transportation equity, community health & wellness and environmental sustainability.  Cyclists tend to support local businesses along their routes and are a significant component of neighborhood vitality, generally.

There is a Midway project underway that aims to turn old trolley right of ways into central protected bike lanes.  The first segment of the Midway network, referred to as the “proof of concept corridor,” will run along Superior Avenue, from the east side of Public Square to East 55th Street.  http://www.bikecleveland.org/midway/  Cuyahoga County has a Greenways project in the works as well.  Their goal is to expand and increase connectivity of existing trails.  http://www.countyplanning.us/projects/cuyahoga-greenways/

Finally, consider joining the advocacy group, Bike Cleveland, which includes membership to our local chapter, Bike Euclid.  A link to their bike guide can be found online. http://www.bikecleveland.org/resources/getting-around-bike/  See also:  Ohio Bicycle Federation http://www.ohiobike.org/ and The League of American Bicyclists (founded in 1880) https://www.bikeleague.org/ .

Alisa Boles is a local attorney and bicycling enthusiast.