OHIO BIKE LAWS - WHERE TO RIDE 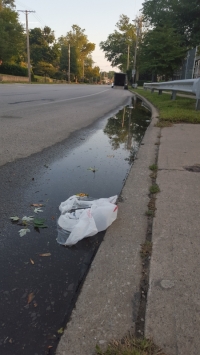 In the foreground:  Litter and standing water in a bike lane.  In the distance:  Parked lawn care truck blocking the lane.

This article is the second in a series intended to give you a better understanding about laws that are in place to ensure safe and efficient shared used of roads between motorists and cyclists.  In last month’s article, we covered the basics: bikes are considered vehicles, they must generally follow the same rules as cars and they have certain equipment requirements. Once a bike and cyclist are ready to go, the next concern is deciding where to ride.

This may seem counterintuitive at first, but a sidewalk is not necessarily the safest place for a bicycle.  Most of us teach our kids to ride on the sidewalk when they are little, but then we also have to teach them about the hazards of cars backing out from behind bushes and buildings, cars that don’t stop at stop lines before crosswalks at intersections, etc.  There is no set age, but once a person is old enough to operate a bike with full control and understand the rules of the road, it might actually be safest for them to ride in the street.  This is where visibility is best.  Morevover, bikes on sidewalks can actually be hazardous to pedestrians.  This is why some cities have laws against riding on sidewalks.  For example, Euclid law prohibits riding a bicycle in a business district.

Issues with the lanes themselves:  Now, this is really going to sound strange, but the safest place for a bicycle is not always in a bike lane, either.  It is all too regular an occurrence to see a bike lane full of standing water, broken glass and other litter.  Uneven pavement can also add wear and tear to both the bike and cyclist.  If a pothole can throw a car out of alignment and make a ride in even the nicest car uncomfortable, imagine what it does to someone riding a bike – especially to the parts that make contact with the bike such as wrists and other sensitive parts that will go unnamed.  Hint: they are in the seat area!

Issues with parked cars:  Parked cars also pose hazards to bikes, either by physically blocking the bike lane, or when the bike lanes were put too close to the parking lanes.  Cyclists need an extra few feet of clearance in case anyone opens a car door as they pass by.  Drivers are responsible for any harm they cause opening their doors, but wouldn’t it be a win for everyone if no one were to get hit in the first place?

Issues with turns:  A car should not cross through a bike lane until it is sure it can do so without cutting off a bicycle.

Unless there is a hazard-free bike lane, the best place for a bicycle tends to be on the road, smack dab in the middle of a traffic lane and going in the same direction of traffic.  Next month, we will elaborate on this concept further.

Alisa Boles is a local attorney and a bicycling enthusiast.