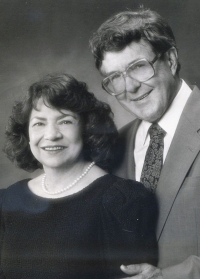 Obituary for Grafton and Elayne Fanney

After a brief illness, Elayne Phillips Fanney, surrounded by love, passed peacefully on May 7 in Bonita Springs, Florida at the age of 92. After 70 years of marriage, Dr. Grafton (Bob) Fanney followed his beloved wife on July 3, just shy of his 93rd birthday.

Bob and Elayne met at University Hospitals in Cleveland, Ohio in 1947 and were married in 1948. They often recounted the story of how Bob knew Elayne was the woman for him the moment they met. Theirs was a “Love at first sight” story, and they continued to share love with everyone they met until their last days.

Elayne Phillips was born on November 14, 1924 in Cleveland, OH, grew up in Erie, PA, and graduated from Strong Vincent High School. She studied science at Western Reserve University and completed her degree in 1945. Elayne was a creative homemaker, and a loving and devoted wife and mother of four sons. She passionately loved the world of theater – acting, dancing, and singing with the Euclid Lyric Guild for 35 years. Elayne sang and danced throughout her life, and performed in her last dance recital just a few months before passing.

Grafton (Bob) Fanney was born in Spring Hope, NC and grew up in Scotland Neck, NC. He graduated from the University of North Carolina and then attended Washington University School of Medicine. He completed his residency in pediatrics at the Rainbow Babies and Children’s Hospital in Cleveland. During his residency, he served as a Captain in the Army Medical Corps during the Korean War. He returned to Euclid, Ohio where he practiced pediatrics for 45 years and served as an Associate Clinical Professor of Pediatrics at Case Western Reserve Medical School. Bob loved his sons, and was incredibly proud to raise 3 doctors and a medical engineer.

Bob and Elayne were loved and cherished by many. They enjoyed a wonderful life together and will be greatly missed. They will be laid to rest together in Scotland Neck, NC at a private memorial service on September 3, 2017. In lieu of flowers and memorials, donations may be made to Bob & Elayne’s favorite charities: the Humane Society, the Audubon Society, and the World Wildlife Fund.

I grew up in Euclid. Went to EHS and graduated in 1968. We lived on Sycamore and then Breckenridge Dr. My Dad was a pediatrician in town until 1997.