Hughes is a Profile of Leadership, Mentorship, Resiliency 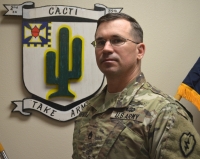 SCHOFIELD BARRACKS, Hawaii — Staff Sgt. Brian Hughes found facing adversity, especially when it involves your family, isn’t something that a service member has to face alone.

“I was born and raised in a blue collar town in Euclid, Ohio, which is a suburb on the eastside of Cleveland, Ohio,” Hughes said. “I was active in sports growing up, pretty big physical fitness enthusiast, big into football and knew that I wasn’t ready for college graduating high school.”

He had joined the Marine Corps through the delayed entry program during his junior year of high school and went to basic training in 1989 at Marine Corps Recruit Depot, Parris Island, S.C.

As a newly minted communications center operator, Hughes went sent to Camp Foster on the Japanese island of Okinawa, and later to Marine Corps Air Station, El Toro, near Irvine, Calif., where he learned about leadership.

“I had a number of solid leadership mentors that really took me under their wing, guided me and showed me the importance of character and leadership, and those lessons served me greatly in the civilian sector when I got out,” he said. “It served me in the Marine Corps while I was in, and in the Army today, from the time I came in the Army.”

After leaving the Marines in 1993, Hughes put his GI Bill to good use, attending Lakeland Community College at Kirtland, Ohio. He applied lessons learned from the military during his time in college and at work, as he started first as a delivery driver for Donatos Pizza, once a subsidiary of McDonald’s Corporation.

Hughes never forgot his military roots as the Iraq War kicked off. Paying close attention to the ongoing conflict, he eventually attempted to rejoin the Marines once more.

“The Marine Corps had a volunteer program at the time where you (could) serve with 18 months and fight,” he said. “I volunteered immediately. Unfortunately, I was turned down, because I had too many dependents based on the rank I would have gone back into.”

He placed his military plans on the back burner, always simmering in the background, but never forgotten.

However, as the surge in Iraq kicked off, the need for more troops grew. In the beginning of 2009, Hughes read in the newspaper that the Army was accepting Soldiers until the age of 42.

“I was 37, going to be 38 soon,” he began. “I called the recruiter and said, ‘Hey, I want to go infantry. How long can I join for?’ The longest I could join was six years. I signed for six years. I was gone in a couple of months by the time I signed up.”

Hughes admitted it was a bit of a culture shock being out of the military for more than a decade, and joining another branch of service. After a 16-year break in service, Hughes signed on the dotted line and raised his hand to give the oath of service again.

This time, he was on his way to the Warrior Transition Course at Fort Sill, Okla., for several weeks of retraining. Afterward, he went on to attend the Infantry School at Fort Benning, Ga.

“The discipline was really intense,” he said. “When I went to basic training at Fort Benning, I was really surprised of what I was experiencing. From what I remembered, a lot changed in over a decade.”

(Editor’s note: In Part 2, next month, learn of the changes Hughes experienced.)