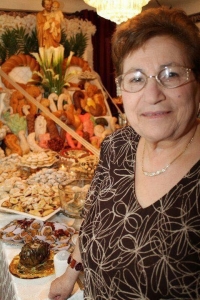 La Tavola di San  Giuseppe is a table adorned with a paramount display of mouthwatering trays of biscotti, flowers, candles, breads and fruits done by Sicilian in fulfillment of a promise made to St Joseph for his assistance in a time of family or personal crises.

In 1960 my mother promised Saint Joseph that she would do the "altar or la Tavola" for the rest of her life if St Joseph would spare my brother's life.

Santo, my brother, was only three weeks old when he was rushed to the hospital with pneumonia. Santo was pronounced dead when my parents first arrived with him at the hospital, only to make an amazing recovery after a very worrisome and painful journey.

So my mother made her promise St Joseph by Santo's hospital bedside. And this my friends we have done! It began in 1961 in Italy and then has continued here in America after we migrated in 1966!

L'Altaro do San Giuseppe is a celebration that is enjoyed by my family & friends each and every year on and or around March 19th!