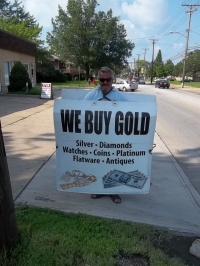 Euclid residents who regularly travel along East 222nd Street are familiar with the sight of the fellow wearing the “We Buy Gold” sandwich board. And, no doubt, passing motorists have made such comments as “Who is that guy?” or “Hey, he’s still out there!”

Well, here’s the answer to the first question. The man is Domenic Brnjic, who has been standing out in front of Euclid Gold & Silver, 630 East 222nd, for the past eight months, from 10 a.m. to 6:30 p.m. each day, seven days a week. When asked why he does such tedious work, he offered a simple, straightforward answer: “It’s a job.”

Brnjic, who emigrated from Croatia to the United States 43 years ago, previously worked for 14 years at the Al Paul Car Wash on Shore Center Drive. When the car wash went out of business, he had to find employment elsewhere—not an easy task in the current economic environment. His business card, adorned with a picture of gold bars and coins, identifies him as being in sales, but his primary role is to attract the attention of people who want to turn their gold jewelry into cash.

Euclid Gold & Silver, owned by Anthony DeBaltzo, is one of many Cleveland area jewelry concerns that have been using TV advertising to drum up business. But it has also found that there are other effective was to attract the public’s attention. Brnjic is proof of that. (By the way, DeBaltzo notes that his business has been doing quite well in recent months.)