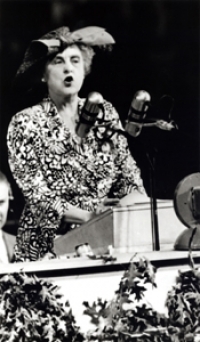 Frances Payne Bingham Bolton (1885–1977) served our district from 1939-1969, first taking over her late husband's seat and then being re-elected for 14 straight elections.  Image courtesy of National Archives and Records Administration

When I was catching up with one of the girls in the neighborhood who turns 18 this year, Amanda Ostroske, she remarked that she was excited that her first chance to vote in an election was going to be the year of the 100th anniversary of Women's Right to Vote.

The 19th amendment to the U. S. Constitution, which extended the right to vote to females in our country, was ratified on August 18, 1920, though the Women's suffrage movement began when our county began.  When our founders suggested equal rights for all, many groups, including women, asked, "What about us?"  Along with the right to vote, came an increase in women's opportunity to run for office.  It's no surprise that women hit the ground running, even right here in Euclid.

The earliest record I have found of a female candidate for Euclid office was Marjorie Carr Jamison (1887-1975), who was elected to the School Board by 1922.  She was a mother of young twin daughters born in 1920 and a 1909 Smith College Alum.  Most female participation in Euclid government was centered around the Schools until we elected our first female Councilperson, Dorothy Burkhart, in 1979.  It wasn't until the turn of this century that we elected a female judge, The Honorable Deborah LeBarron (retired), but she served for three, 6-year terms and we now have a female Mayor, who had previously served as our first female Council President (Kirsten Holzheimer Gail).

Euclid, of course, is also under state and federal jurisdiction.  We have thus had the privilege to be served by non-Euclidian female pioneers as well.  In 1922, Florence Allen was not only the first woman elected to the Ohio Supreme Court, she was the first to be elected to the highest court in any state.  This was after beginning her career in private practice, volunteering for the Legal Aid Society of Cleveland, becoming the first female Assistant County Prosecutor and the first elected female jurist in the state and nationwide (elected to the Court of Common Pleas in 1920).  She went on to become a federal appellate judge (another first) and is buried nearby in Waite Hill Cemetery (Lake County).  She went to law school in Chicago (finishing in New York) because her alma mater, Western Reserve (now Case), did not accept women into its law school at the time.  The legacy of including the wisdom of women on the bench continues on the Ohio Supreme Court today under the compassionate and practical leadership of our first female Chief Justice, the Honorable Maureen O'Connor (elected to the Ohio Supreme Court in 2003 and as Chief Justice in 2010).

On a County level, Blanche Krupansky was the first female jurist on our Court of Appeals (1977).  When she ran for her first political office in 1959, she had to fight in Court for her right to run under her maiden name.  In 1984, Mary O. Boyle was elected as Cuyahoga County's first female Commissioner.  She then served three terms as President of the Commissioner's Board.  Beginning in 2011, C. Ellen Connally served as the inaugural President of the new Cuyahoga County Council and Sunny Simon was the Vice-President.  Simon continues to serve as our district's rep to this day.

We have certainly come a long way, but think about what we have yet to see.   We have yet to have an elected female Governor (though we did have a brief service by Lt. Governor Nancy Hollister to finish the last couple weeks of Voinovich's term when he was elected to Senate).  Our district has had female representatives in the Statehouse since the first year they could legally run:  Nettie Clapp, Ohio House, (1922); and Maude Comstock Waite, Ohio Senate, (1922) - both representing our county, which is how districts were divided at the time.  We have had female U.S. House Reps from our district:  Francis Bolton of Lyndhurst (1939, who became the first mother to serve with her son when the district later split) and Collinwood-grad Stephanie Tubbs Jones (1998, who was also the first Black woman to represent Ohio in the U.S. Congress).  The first female Speaker of the Ohio House was Jo Ann Davidson, serving from 1995-2000.  Nancy Pelosi was elected the first female Speaker of the U.S House in 2007 and remains the highest-ranking woman in U.S. history (with the Speaker being 3rd in line for the presidency should tragedy befall both the President and the VP).  Bear in mind, that Ohio has never elected a female to the U.S. Senate, and our nation has never seen a female President.  Maybe you or someone you know will be one of the next firsts!

Note from author:  I have spent years compiling this research and have listed highlights of my findings.  Some records are sketchier than others, but I have created a chart that includes all named here as well as all other women to have served in Euclid history, including those who ran and did not win.  If anyone has any names that would improve this list, information that would enhance this research project in any way (including photos or connections to descendants) or tips that would warrant a correction, do not hesitate to contact Alisa Boles at (216) 650-0053.  We are considering compiling this information at the Euclid Historical Society.

Alisa Boles is a local attorney and serves as a Euclid Historical Society Trustee.