by Cid Standifer and Brie Zeltner 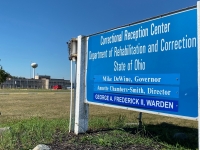 For the first two months after the COVID-19 pandemic hit the U.S., Ohio’s response set an example. Thanks to an early shutdown order, the state’s per-capita deaths from the virus as of late April were less than half of those in neighboring Pennsylvania, a state with similar demographics.

But inside the two states’ prison systems, it was a different story.

By late April , the death rate from COVID-19 in Ohio prisons was 22 per 100,000, a rate more than 4 ½ times the overall Ohio rate and nearly twice the national rate.

In Pennsylvania’s prison system, which houses about 44,000 inmates at 25 facilities, the death rate was comparatively low— 10 incarcerated people have died as of mid August, for a death rate of 23 per 100,000 people, despite the virus showing up in each state just a few days apart. In fact, a Pennsylvania inmate is less than half as likely to die of COVID-19 as a free Pennsylvanian.

Why have Ohio’s prisons failed so thoroughly to control the spread of COVID-19 when Pennsylvania fared far better?

No state has had a model approach for controlling the virus in prisons. But, whether through foresight or luck, factors in some states have kept the virus from running rampant as it has in Ohio prisons. As the country faces new waves of cases, corrections departments may be able to learn from what helped or harmed some states during the first stage of the pandemic.

While advocates for incarcerated people in Pennsylvania caution against holding that state’s experience as a model for how to respond to the pandemic, they agree that the answer may lie both in how crowded the prisons are, and how inmates are housed.

In Ohio, where the prisons were 32% above capacity in February, the virus spread rapidly.

In Pennsylvania’s prisons, at 95 percent of capacity in February,  there were outbreaks in several prisons, but far fewer deaths.

Now, the death count is approaching 80. Ohio’s prison system is home to two of the four largest COVID-19 outbreaks in the nation.

Ohio Department of Rehabilitation and Correction (DRC) spokesperson JoEllen Smith said that some of the plan’s recommendations for Pickaway have been implemented. The Orient Correctional Institution, a prison adjoining Pickaway that hasn’t been used since 2001, was demolished, as was Pickaway’s dilapidated E block of dorms. But construction of a new unit with over a thousand beds is on hold due to the pandemic.

Javalen Wolfe, an inmate incarcerated in dormitory-style housing at Belmont Correctional Institution in southeastern Ohio, said that every time a flu or a cold enters the prison, there’s no stopping it.

Of the 77 confirmed COVID-19 deaths in Ohio prisons as of mid-July, 67 of them were in prisons that were designed to hold at least half their inmates in dorms. The worst Pennsylvania outbreaks were at two prisons where inmates were housed almost exclusively in cells – Huntingdon and Phoenix. But the system overall houses just 19% of its inmates in dorms.

Since mass testing wasn’t conducted at any of the Pennsylvania prisons, the death toll is probably a more faithful indicator of the spread of the disease. The inmate death rate at Huntingdon was 272 COVID-19 deaths per 100,000 people. At Pickaway, it was 1,709, and at Franklin Medical Center, it was over 2,000.

In an interview with Eye on Ohio, DRC Director Annette Chambers-Smith acknowledged that the open bays make it difficult to control the virus. She said they have attempted to mitigate dorm crowding by spreading inmates out in other areas that aren’t normally used for housing, such as gymnasiums and classrooms.

Pennsylvania started the pandemic in a relatively good position in terms of space after years of modest, gradual population reduction. They freed up more space after the pandemic hit by giving 3,500 people sentence reprieves and shutting down the county court system.

Several other states have taken steps to free up space in their prisons since the pandemic began, with 15 reducing their prison populations 10% or more between March and June, according to data from The Marshall Project.

Putting the community at risk

County health officials and residents voiced concerns in emails that both staff and inmates who finished their sentences were capable of spreading the virus across multiple counties.

In one email obtained by the Documenting COVID-19 project, Traci Kinsler, the Marion County health commissioner, noted that the Marion prison was not isolating inmates before releasing them. Marion released at least one inmate who was known to be infected with COVID-19. He moved to Ashland County.

Marion staff members who contracted COVID-19 lived in at least 20 different counties, according to one message. Two were from out of state.

Inmates are tested before their release dates, she said, and those who were selected for early release have their release dates pushed back if they test positive until they are considered recovered— officially defined by the department as 14 days past the onset of symptoms, and 72 hours symptom-free. If they reach their regularly scheduled release date, the department has no authority to keep them incarcerated, but will release COVID-positive people with a quarantine order.

Kinsler told Eye on Ohio that the Marion prison outbreak flooded the Marion Public Health Department with cases all at once, and at first officials in various departments struggled with contact tracing. They were able to contact most of the infected people who were released, though, and alerted the county health departments where they settled.

Ultimately, most of the 2,532 people known to be connected to the outbreak at Marion Correctional were either inmates or staff. But the virus made its way to an additional 58 people outside the prison, including family members, health care workers and food workers.

And there could be other cases where health workers simply forgot to label the infection as related to the Marion prison outbreak in the database.