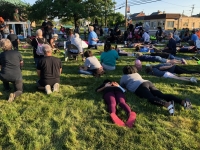 Rally participants reflect in silence for 8 minutes and 46 seconds, many in a prone position as a way to reflect on the treatment of George Floyd.

In the midst of national turmoil, protests and riots over multiple deaths of African Americans throughout the country as a result of police action, Euclid’s Faith in the City group hosted a peaceful protest march in Euclid on June 11.  Faith in the City is a collection of various faith-based groups and churches committed to working together and with the City to make Euclid a place of welcome for all.  Billed as Rally for Change, this was the third peaceful event held in Euclid since the death of George Floyd at the knee of a police officer in Minneapolis, sparking a national outcry for an evaluation of policing practices and social justice reform related to Black Americans.

With 175 people gathered at Triangle Park outside Shore Cultural center, the entire group marched down East 222nd Street led by chants of “No justice no peace”, “Get your knee off my neck”, and “I can’t breathe”.  The crowd was an equal mix of races with approximately half of those in attendance being black.  Many supporters held homemade signs calling for social justice for Black Americans while Black Lives Matter shirts and signs were common throughout the gathering.  Along the way, a few observing residents joined the march while others waved or honked horns in support.  The event was attended by numerous pastors, several council members, Euclid’s Chief of Police Scott Meyer and Mayor Kirsten Holzheimer Gail.

In contrast to many national demonstrations, every participant was wearing a mask to protect against Covid-19.  Even at the speakers’ podium, those addressing the crowd were practicing safe distancing and even disinfecting the microphone before its use.

While some attendees were experienced protestors, many came at the urging of their pastors with attendance at the rally a first for them in protesting social injustice.  Michael Ballard owns a small electrical contracting firm and said he came because he felt the need to speak out.  “It’s not just justice with the police.  I own a business and see examples of racism all the time as a contractor.  I said to myself about a week ago that I’ve got to go out there and be a part of (the rally).“

Several speakers from the faith community gave impassioned pleas for social justice for the African American community with an emphasis on these protests being “A movement, not a moment” in the words of one pastor.  As speaker after speaker highlighted numerous instances where black Americans were hurt or killed by overly aggressive police tactics or suffered as a result of social injustice, a cloud of uncertainty hovered over the event.

While both Chief Meyer and Mayor Gail addressed the crowd and spoke to the importance of unity in seeking long term social justice, in interviews prior to the march both acknowledged the difficulty faced in reforming the police under current conditions.

Euclid experienced the challenge of police reform first hand when Officer Michael Amiott was captured on video allegedly using excessive force during an arrest in 2017.  After examining the evidence Amiott was fired by Mayor Gail with the support of Chief Meyer.  In spite of the firing, Euclid was forced to rehire the officer with back pay due to an Arbitrator’s ruling.  Arbitration is allowed for in the collective bargaining agreement between the City and the Police Union. Officer Amiott is awaiting a criminal trial on assault charges to begin while continuing to work in the Euclid Police Department as a warrant officer.  The assault charges were filed by a group of citizens in December of 2018.

“These are not processes that the police department can change,” said Chief Meyer citing the arbitration process that governs how police, teachers, fire fighters, and even some government workers can be disciplined or managed.  “A lot of the changes people want to see will have to come out of the legislature.”

Mayor Gail said she is hoping for change on a national basis to provide consistency throughout the country.  “That situation (firing Officer Amiott) and other (situations) like them are why people are frustrated.  We see something happen, it seems egregious and then the system doesn’t support our feelings.  I think it’s an example of why we do need to look at the bargaining agreements.” said Gail.

When asked how diverse the Euclid Police Department is, both Meyer and Gail commented that having a more diverse staff is an important part of their efforts.  “We have made diversity in hiring a priority.  While the department as a whole is now comprised of 20% women and minority members, the hiring that Chief Meyer and I have conducted represents a higher number.  Hiring since 2017 reflects 40% female and minority members,” added Gail.

In closing the rally, attendees were asked to lay prone or take a knee for 8 minutes and 46 seconds, the time George Floyd spent on the ground with a knee to his neck.  The silence that fell over the crowd during this time offered attendees a chance to reflect on the fear George Floyd must have felt just before he died.