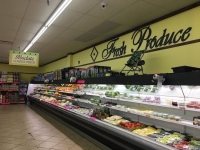 It’s not exactly common for grocery store owners to be on a first-name basis with their customers, but Simon Hussain isn’t just any store owner.

In 2017, Hussain opened Simon’s Supermarket on Euclid Avenue near East 260th Street—the third location in his growing chain that now also includes locations in Buckeye and (as of 2020) Bedford for a total of five stores. The vision behind the concept is to bring healthier food options into lower-income neighborhoods and known food deserts. To that end, the Euclid project received $650,000 in grants and loans from the Healthy Food for Ohio program, along with active collaboration with the Cuyahoga County Board of Health’s “Creating Healthy Communities” program.

“[We believe] access to healthier food options should be an inherent right,” explains Michelle Benko, program manager for the Cuyahoga County Board of Health.

Hussain says he first got the inclination to open a Euclid location when he noticed that a lot of residents from the area were traveling to his store at East 152nd Street and St. Clair Avenue. “We got a lot of customers from that part of town, and they were always asking if I could offer something like that in Euclid,” says Hussain, who originally hails from Pakistan.

Hussain delivered on that request in a big way—over the last two years, Simon’s Supermarket has increased access to healthy food for 2,559 Euclid residents and 1,442 Euclid households that had previously been stuck in a food desert. (According to Ward 3 councilwoman Taneika Hill, the next closest grocery store is a Save-a-Lot, which she says is too far away and too expensive for many residents.)

To date, the supermarket has also created between 45 and 60 jobs, with many of them occupied by Euclid residents, according to Roger Sikes, grant program manager at the Cuyahoga County Board of Health.

To make sure Simon’s Supermarket keeps meeting the needs of Euclidians, Hussain proactively participates in open dialogue with the community via public forums that are focused on how the supermarket can better serve its customers. So far, there have been four meetings at the Euclid location, with between 80 and 140 residents in attendance at each—and Hussain, Hill, and the Cuyahoga County Board of Health playing an integral part in these meetings as a way of building trust between the supermarket and the residents it serves.

From Sikes’ perspective, it’s a bold—but worthwhile—move on Hussain’s part to subject himself to such public scrutiny. “People are under stress in these neighborhoods, and you have to open yourself up to that feedback,” says Sikes.

Right now, the store is evaluating the results of a customer survey conducted in September—in which 50% rated the customer service as “average” and many residents expressed a desire for more options tailored towards those with diabetes. Participants also weighed in on the top four services they’d like to see at Simon’s Supermarket, including a pharmacy, RTA passes, money orders, and healthy food prep demos.

The transportation piece is a big one—after all, the majority of Simon’s Supermarket customers lack access to a car. In closing the gap, Hussain and the Cuyahoga County Board of Health will be working with the RTA to try to bring bus ticket sales to Simon's Supermarket in 2020 via a REACH (Racial and Ethnic Approaches to Community Health) grant from the Centers for Disease Control and Prevention.

“Proximity matters a lot. Anything more than half a mile [away] is difficult for working-class folks,” says Sikes. “As a county, we need to understand stress in our neighborhoods; it gets to the deeper inequalities.”

The next forum will be in early 2020 at Hill Villa, a senior apartment complex that houses a big shopping demographic for Simon’s Supermarket. Before the next meeting, the goal is to make progress on some of the items pinpointed in the survey—including healthier deli options, fresher meat and produce, customer service training, and food discounts.

“We want [Hussain] to be successful, and the meetings give residents an opportunity to hold him accountable,” Hill says.

It’s all part of a larger mission to address community public health concerns and build trust within the Euclid community, where 59% of residents are African American, and 20% of residents live under the federal poverty level.

“Racial dynamics in Cuyahoga County are big,” says Benko. “There is already mistrust in the county, and these forums help build trust across different groups of people.”

For Hussain, running the store effectively in partnership with his customer base is simply a matter of meeting them where they are. “Without customer listening, I’m in a blind spot,” says Hussain, who also holds regular community meetings at the Buckeye location. “Inner city [shoppers] have different needs than in the suburbs, and if you’re not engaged with them, you don’t know what they require.”

This article is part of FreshWater Cleveland's On the Ground - Euclid community reporting project in partnership with City of Euclid, Euclid City Schools, Tri-C, and Cuyahoga County Board of Health.


Saturday, March 14:
10:00 AM - 11:30 AM - Support for a Child or Teen with Cancer: Including Siblings and Parents MARCH MOVEMENT MADNESS