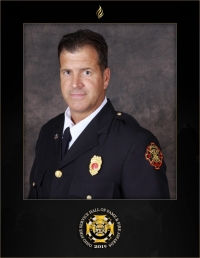 On the night of Feb. 12, 2019, Lt. Storey was off-duty and traveling home with his children when they witnessed two cars collide on Interstate 90 in Cleveland. One vehicle flipped, throwing the female driver out of the car and onto the highway in the path of oncoming traffic. Knowing he had to act fast, Lt. Storey positioned his car to protect the severely injured, but conscious, woman from traffic.

He then made his way to the other vehicle, which had crashed into a guardrail and caught on fire. With both occupants unconscious and trapped inside, he worked with a bystander to cut through deployed airbags and safely remove the injured driver and passenger from the wreckage.