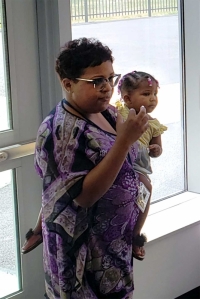 The Lakeland Civic Association will hold its regular October meeting at the Early Learning Village, hosted by Principal Sanya Henley, Thursday evening, October 10 at 7:30pm. This quarterly meeting of the LCA will celebrate the group's return to the venue on Elinore Avenue that it had enjoyed for many years until Euclid Public Schools was forced to renovate and repurpose the old Forest Park facility.

Before taking up her current position, Principal Henley taught for fifteen years in Shaker Heights City Schools, where she also served as International Baccalaureate Coordinator. She later joined the administration of South Euclid Lyndhurst Schools as unit principal for grades four through six. Her new duties began three years ago when Euclid Public Schools enlisted her to lead the district's Early Learning Center and its growth into the Early Learning Village as its first principal. Principal Henley will conduct a brief tour of the Village's welcoming campus, and will take questions from members about the school's operations and their impact on the city's youngest students and on its neighbors.

The Lakeland Civic Association was founded in 1952 to represent the properties and residents within the neighborhood bounded by E272nd St, Forestview Avenue, and Walnut Drive. LCA regular meetings are public and open to all.