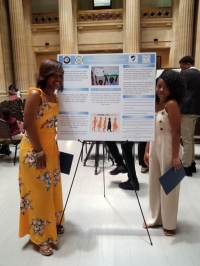 Initially, Aiyanna wasn’t sure about a career in public safety but was encouraged by her step-dad, who works as an EMT, to take part in the program. Aiyanna participated in rigorous, physical training that firefighters and officers go through, including going up a building in gear and learning how to put out a dumpster fire. Similar to how police and fire departments form close relationships within their units, the same sense of teamwork and support was felt among the students. “It felt like home. We learned as a family,” Aiyanna said.

Aiyanna said that completing CPR certification and the capstone project proved to be the most rewarding aspects of the summer program. At only 15, Aiyanna is proud to be equipped with the skills necessary to save a life. For her capstone, she researched the impact of poverty within the African American community and resources available to help those in need. This project deeply impacted her, as she acknowledged having friends who face economic hardships. Reflecting on the project, Aiyanna said, “Even being young, I have a voice and can make a positive change in the world." Her capstone team earned third place out of more than 20 teams.

For Aiyanna, the Public Safety Career Pipeline Program was more than just a summer experience. Her eyes were opened to the possibility of careers serving her community. After learning about one team leader’s decision to join the Air Force, Aiyanna was inspired to learn more and consider the same option for herself after VASJ and before entering college.