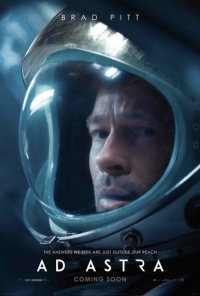 Ad Astra Movie Review - The film is dependent on two things (1) Brad Pitt's performance as he is the only actor in the vast majority of scenes and (2) The payoff at the end being worth the journey. The film throughout maintains a consistent inching along as Pitt attempts to reach the far ends of space but he is emotionally detached intentionally and his lack of emotional response to challenges make him a difficult protagonist to like. The payoff just isn't there as it is too short and lacks the weight of resolution necessary for the movie's running time. If you watch, don't get too involved in any side characters along the way. About a dozen of them come and go as soon as you might get emotionally attached. Grade: D plus.