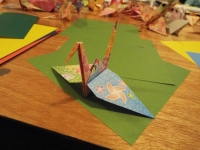 Peace Crane made out of oragami paper by Nonviolence Ministry.

Sadako Sasaki was two years old when the atomic bomb was dropped on her city of Hiroshima, Japan, on August 6, 1945. She wasn’t killed, but her grandmother and several friends were. As a young girl, she was an extremely fast runner. But at age 11, she collapsed after a race and was eventually admitted to the hospital where she learned that she had contracted leukemia from the radiation of the atomic bomb. A friend told her about the Japanese legend of the paper cranes. If you make 1,000 cranes, your deepest wish is granted. Since the crane is a symbol of long life, her friend thought if Sadako made 1,000, maybe she would be cured. Sadako worked for months, completing more than 600, but realized that she was dying. On her last crane (#644), she said she wanted to write “Peace” on its wings so that it would fly over the whole world telling children and adults everywhere to work for peace, so that no other child would have to die as she was.

Her classmates finished the 1,000 cranes and took a collection around Japan to build a 30-foot arch in the Peace Park in Hiroshima with a statue of Sadako on top, with a crane over her head. Children and adults all over the world continue to make the paper cranes as a symbol of their commitment to work for peace.

Read More on Our Lady of the Lake