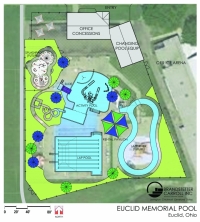 The conceptual plan for a new outdoor aquatic center in Memorial Park includes a new pool house with changing rooms, a rental pavilion for parties, a zero-depth entry activity pool, a separate pool for lap and competition swimming, a 20’ foot water slide and the potential for a lazy river and splash pad.

On Wednesday, July 10th Euclid City Council’s Parks and Recreation Committee heard a presentation of the draft Euclid Aquatics Feasibility Study. Presented by Larry Brandstetter and Nancy Nozik from Brandstetter Carroll Inc. (BCI), the presentation outlined the firm’s extensive research into the outdoor pools existing conditions, reflected on the Spring 2019 community engagement process as well as a laid out a road map for the future of the facilities.

BCI was selected by the City from a competitive RFP process in Fall 2018. Over the past few months, the firm analyzed the five existing outdoor city-owned facilities - including neighborhood pools that have recently closed (Glenbrook, Roosevelt and Willow) and presently operating facilities (Memorial Pool and Indian Hills Splash Pad).

The Study emerges amidst increased maintenance needs and operating costs at the City’s aging facilities. Benefits of outdoor aquatics programs, however, include increased public safety while building a sense of community. BCI explained during the presentation that cities in Northeast Ohio who have rebuilt their pools to meet modern demands have seen large increases in attendance and have significantly reduced their operating deficit.

During the Citizen Engagement process, BCI conducted surveys and community meetings which revealed that residents are interested in infrastructure that the current pools do not offer, including a lazy river.

The recommendation to the City from BCI is to focus on one new, high quality pool facility in a central location that meets the needs and desires of the community. During the July 10th meeting, Director Mac Stephens concurred with the recommendation and emphasized that reducing the quantity of facilities will enhance the offerings of his Recreation Department by streamlining resources.

Features proposed include a new pool house with changing rooms, a rental pavilion for parties, a zero-depth entry activity pool, a separate eight-lane pool for lap and competition swimming, a 20’ foot water slide and the potential for a lazy river and splash pad.

“We now have a vision for the outdoor pools and an idea of the cost. It is exciting to think about the impact a state-of-the-art facility will have on our community,” remarked Jonathan Holody, Director of Planning and Development.