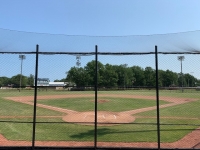 Memorial Park has always been a destination for a variety of activities such as softball/baseball, tennis, soccer, swimming, basketball, gardening, a playground, and ice arena activities. Now there are even more reasons to come out and enjoy Memorial Park!

We are excited to announce that the park now includes dedicated pickleball courts and walking paths throughout.

In the spring of 2019, $30,000 in improvements to Serra field were completed. Among these renovations are new fencing, a resurfaced infield and the installation of an irrigation system.

The basketball courts behind the police station were sealed and repainted this past spring.

The renovation of the tennis courts and installation of the new pickleball courts was made possible by a $20,000.00 grant from the United States Tennis Association (USTA).

Memorial Pool had major upgrades completed before the start of swim season,  including the re-opening of the interactive area, resurfacing of the pool deck area, repainting of the main pool and additional equipment added for the safety of our residents.

At the end of 2018, Brandstetter Carroll Inc. was selected to conduct a study of our aquatic facilities. Recently, the results from the outdoor aquatic family aquatic feasibility study were presented to the city administration, Parks and Recreation Committee and the residents of Euclid. They concluded that the proposed pool improvements for the outdoor family aquatic center will focus on enhancing the attraction and opportunities for families with smaller children, as well as lap swimming/swim meets along with building a new pool house.

Euclid Public Schools played the primary role in installing walking paths throughout Memorial Park. There have been many favorable comments from students, walkers, joggers, and baseball field patrons due to the convenience that they bring.

Thanks to a very dedicated group of volunteers, the Memorial Park Community Garden has doubled in size compared to last year. As a result, an area once considered an eyesore has been transformed into a beautiful corner of Memorial Park.

The C.E. Orr Ice arena continues to become a regional destination for many hockey groups and ice users. Request for ice time has increased substantially by many groups. Major capital improvements are on the horizon for a bright future a C.E. Orr Arena.

I encourage you and your family to stop by and see all the wonderful improvements throughout Memorial Park. There is something for everyone!