Theater Nostalgia in Euclid and Collinwood 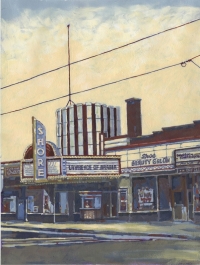 Several years have passed since Francis Demaske created this trio of nostalgic theater paintings.  The artist has had a long fascination with the built environment and creating art documenting the urban landscape. He is a formally trained artist, illustrator, graphic designer, and tenured professor teaching at Edinboro University in Pennsylvania. His three works displayed here are nostalgic Euclid and Collinwood Theaters. The LaSalle Theater is the only theater which exists in its original design. The Shore Theater was demolished in the early 1980’s, and the Lake was remodeled in the mid 1980’s, the result of a theater expansion.

The inspiration for the theater series was the result of a drive by of the LaSalle Theater. At the time it was showing deterioration and Francis wanted to document the beauty of the landmark in its heyday. The LaSalle painting was followed by paintings of the Lake and Shore theaters. A donation of framed copies was made to the Euclid Historical Society. He is currently producing a contemporary painting of the LaSalle along with one of the Warner Theater in Erie, Pennsylvania. He has achieved the feeling of a late summer evening with warm pale early evening light moving across the theater surfaces, the intricate detailing of signage and neon, the neat geometric shapes made by the contours of the structures as they cut into the summer sky.

The art deco style Lake Theater began as a single screen theater in 1949 containing 1,600 seats. The side walls of the auditorium had large nautical themed murals. The theater was acquired by Al Saluan in the early 80’s. Saluan divided the remaining theater into three screens and started showing only first run movies.

The Shore Theater opened in 1939 with 1800 seats and served the Euclid community until the mid-1970’s. The lobby contained a “starlight” ceiling with small stars which glowed in the dark. It was acquired and demolished by the City of Euclid in the early 1980’s. The property was located immediately to the east of Fifth Third Bank.

The LaSalle Theater, a Collinwood neighborhood icon, is located on the south end of East 185th Street. The theater opened in 1927 serving the Collinwood area for many years. It began as a vaudeville venue. The LaSalle likely combined vaudeville with silent movies. By the 1990’s it was a $1 theater showing third run movies. Recently a combination of funding in the form of grants, tax credits, and debt allowed the building to undergo a complete renovation.

A special print containing all three theaters has been prepared and is available for purchase from 4 Corners Framing.  The frame shop is located in one of the retail spaces of the LaSalle Theater. They have framed a print of Demaske’s LaSalle Theater and have a booklet from which prints of his art work can be purchased. 4 Corners Framing specializes in the conservation and display of art work and documents.