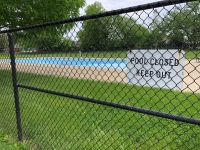 Willow Pool will not have it's colorful mushroom spouting water for neighborhood swimmers this year.

In a letter posted on the City’s website May 20, Euclid announced the closing of two neighborhood pools.  Willow Pool located in of Willow Park on Willow Drive and Roosevelt Pool on Arbor Avenue are being shuttered due to cost constraints according to Euclid’s Recreation Director Mac Stephens.  The previous year Glenbrook Pool was closed, other than rental parties, it experienced only 12 visitors throughout the summer.

“This is something I felt we should have done before,” said Stephens of the closings of Willow and Roosevelt Pools.  “Both locations have experienced a lack of attendance over the past several years.  If the pools were being utilized, I would want to keep them all open.” In addition to sagging attendance at the neighborhood pools, a major factor for the closing of Willow and Roosevelt Pools was the cost of maintenance requirements.

Stephens stated in order to open the two pools it would cost the city $120,000 for repairs.  According to Stephens, Roosevelt was particularly problematic as it had to be sandblasted and repainted yearly.  One year, it had to be drained in mid-season and repainted.  By closing the two neighborhood pools, Euclid will save the cost of providing lifeguards and having City employees spend time on repairs to the two facilities.  Stephens emphasized that Ralph V. Hill Memorial Pool and the Indian Hills Spray Park will stay open.  He added that the kiddie pool at Memorial Pool will be in operation for the opening of the summer swim season.

Several Euclid residents with younger children contacted about the closure of the neighborhood pools were saddened by the news.  Mathew Brown, who lives across the street from Willow and has four small children, commented that “I was going to go up there this summer to get my kids (a pass).  Now there’s going to be an empty pool sitting there all summer.”  Plans for what will happen to the two pools is still undetermined.

While Euclid recently commissioned research focusing on the City’s public pools, the study conducted by Brandstetter Carroll Inc. was not seen as driving the decision to close the pools.  Stephens said that the results from this research will be made available July 17 to the Parks & Recreation Council committee.

“I think the public will be very pleased by the recommendations,” said Stephens about the upcoming release of the Brandstetter Carroll study.  “The community should understand that we are trying to upgrade the aquatic program.”

While the City closes the last of the neighborhood pools; another controversy surrounding the Euclid High School pools is coming to a head.  Currently, there are two pools operated in the High School which are open for use by residents during the school year.  A decision has been made to close one of the pools to the surprise of some residents.

According to a series of email exchanges between Councilman John Wojtila who questioned the closing of the school pool, with Patrick Higley of the Euclid School District, a decision was made to fill in one of the pools while maintaining the other pool.  This, in spite of the fact that during the campaign for the school levy to build a new high school in Euclid, residents were promised that the schools would partner with the City to ensure continued access to pool facilities for residents’ use and that both pools would continue to remain open.  Some see the decision to fill in the pool as either poor planning or a breach of trust.

In his email response, Higley stated “the initial plan was to keep both pools open after renovations completed in the high school athletic wing.  After an engineering audit was returned, the cost (of) renovation and routine operation was extraordinary.”  A group of Euclid residents continue to question the decision and have pushed for a meeting with Higley and the Euclid School District which is being held on June 5 in the Fordyce Building at 6 PM to further discuss the matter.

Beth D’Arcy plans to attend the June 5 meeting.  “I’d like them to change their mind and honor their commitment to the voters and keep both pools open,” said D’Arcy.  “Outside of that, I’d like to hear what options were considered and an explanation why there was no community involvement in the decision.  Lastly, I’d like some assurances about pool availability going forward.”