Euclid In 1959A Grand Birthday Celebration 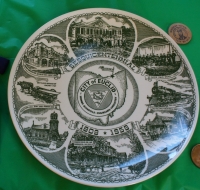 “Sesquicentennial” is a word meaning 150th anniversary. In Euclid, sixty years ago this June, it meant the biggest and best party in Euclid’s long history.

Euclid Township was organized in 1809 and one hundred and fifty years later, an eight-day extravaganza with all sorts of special events to celebrate the special birthday were organized by event chairman Robert C. Palmer, twelve committees and about 1000 volunteers.

The festivities began with a Coronation Ball in TRW’s ballroom where the “Sesqui-Queen”, Dorothy Hearn and her court were named.  It ended more than a week later after the eighth and last outdoor performance of the dramatic historical spectacle “Euclid-Rama” in DiBiasio Stadium, featuring 500 residents as cast members. The production traced Euclid’s history beginning with “Along the Indian Trails” to the “Mutiny at Conneaut Creek” and later from the “Iron Horse,” “The Roaring Twenties” until ending with “The Day of the Satellites.”  It was only shortly before that time that first Russia with its Sputnik and, shortly thereafter, the United States blasted off into the skies.  Fittingly, the celebration ended with a grand fireworks show just after the curtain came down.

The Sesquicentennial was filled with parades, dances, and special days for youth, ladies, senior citizens, veterans and “industry-good neighbor” day. Men were encouraged to grow beards to join “The Brothers of the Brush.”  Men and women wore 19th century attire and traded wooden nickles and gold coins made especially for the occasion.

The grand parade on a hot Sunday June 28, 1959 took place along a 2.5 mile stretch of Euclid Avenue from Chardon to Richmond  led by Congresswomann Frances P. Bolton and Mayor Kenneth Sims, then in his 22nd year as mayor. A reported crowd of 50,000 watched the parade.

Leonard B. Voorhees, a key founder of the Euclid Historical Society, oversaw the historical portion of the event, writing an extensive history in the souvenir program (pictured) and consulting on historical accuracy for the “Euclid-Rama” production. Some interesting tidbits discovered by Mr. Voorhess: in the earliest days of the settlers, bear, rattlesnakes and even panthers roamed the woods; a sawmill was built where the east and west branches of Euclid Creek meet, just south of Euclid Avenue, fifteen Euclid families received stipends when their relatives did not return from fighting in the Civil War, the railroad made it possible for fresh oysters to come from Baltimore to Euclid in 24 hours and the construction of “Little Red School Houses’’ throughout the township by 1900.

Euclid split from the larger township to become a separate village through a vote of the people in early 1903. 130 voted for the village and 126 voted against the proposal. Euclid’s first mayor, H. S. Pickands was elected that year in another close vote, 61-48, defeating Charles Harms.  Euclid’s first high school was on School Street, now named North Street off Chardon Road, and its first graduating class in 1897 included six graduates.  One grad, Mr. Will Houck was killed the following year in the Spanish American War.  That old high school now houses the Euclid Historical Museum at 21129 North Street (289-8577).

There were many sponsors and patrons who supported the energetic volunteers.  Some of them are still around today, Lincoln Electric, Wilke Hardware, Carmella’s Pizza and American Legion Post 343.

Mary Poppins did not debut for a few years after the Euclid Sesquicentennial ended but she would have agreed with the community’s 60,000 residents, IT WAS SUPERCALIFRAGILISTICEXPIALIDOCIOUS!