Life as a Vegan 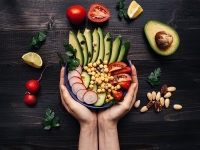 Recently my good friend Dashaun Jones has being living
the Vegan culture life . I was so amazed by his Drive to
live and try something so different from how he came up
eating the traditional food culture, so I had to give him this
interview on how and why he did it
Q: So with the popular tradition dishes such as , pizzas,
cheese steaks, mexican grill foods , and etc . So what
made you decide to go the Vegan life?
A: I was trying something new. I wanted to experiment
with this way of dieting to see how it would effect me. I
was drinking 2 energy drinks a day and wanted to find a
much healthier way to build energy. I did research and
learned that various fruits could improve my energy and
thought i might as well go full vegan.
Q: Years of eating food you grew up on how hard was the
transitions to switch to vegan eating?
A: Tough. Real tough. The whole first week all i would
think about is hot wings with ranch. It’s always the wings.
It was a mental thing. I saw results the second day so i

didn’t want to stop the diet. I had to stay diligent and
remember why i started this journey to begin with.
Q: So how did you start off? What did cutting out your
diet? And what did you start putting in your diet?
Since been a vegan , what changes have you noticed so
far with your change of eating?
A: To answer the first two questions, as a vegan i had to
cut out anything i ate that came from an animal, or had
something from an animal in it. Next, i did excessive
research on what vegans would normally eat. I also
understood that i had to change my whole way of eating.
Q: With being a Vegan do you believe in growing your
food or buying vegan food from the stores ? Do you see
the world shifting over to the vegan life?

A: Growing your own foods are more beneficial than
buying foods from a store. You never know exactly what
they are doing to the foods in the stores. And yes, more
and more people are waking up and joining the vegan way
of living.
Q: Do you think your the closing the gap for the future of
traditional food culture for your family , by showing your
kids a life that they could learn and pass down vegan
culture to their kids?
A: This is most definitely changing the way we eat and
look at foods. My daughter rarely eats meats and is one of
the most healthiest kids ever. With that being said, her diet
made it even easier to change our diet and i know she will

this generation to pass down these habits.
Q: Do you think you can continue life as a vegan or is it
faze that you are this curious about?
A: As of right now I faze in and out of the vegan diet
because i haven’t quite master my protein intake, but I
could definitely do this as a permanent diet.
You can follow Dashaun Jones on
instagram and twitter @dae_12_dae
I can be followed on Instagram @imthegreatdame
Twitter damehayes1