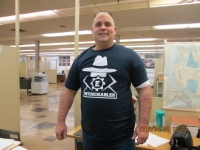 The Zagar Inc. machine company was founded in 1937. Dedicated to the idea that everything needs holes, the Zagar gearless drill heads were manufactured during a robust period during the world wars and became a great product on the American market. The factory, located in Euclid, Ohio, right off of I-90, also makes work-holding fixtures, drilling and tapping machines, and custom machinery.

The location of the factory was chosen off of I-90 due to exposure to the highway back in the day which is still a great place today. Always the forward thinker, Mr. Zagar saw hole-making equipment used in the constantly expanding fields of medicine, aerospace, automotive and military industries. Although these are main areas of business, many other entities have been served. The company has even drilled holes in hair picks for the tines during the 80’s hair craze.

The company’s customer base spans the globe and encompasses whatever needs a hole drilled in any type of surface and material. Currently, there are approximately 20 employees who work at Zagar, and the owners feel that one of the bigger challenges that the industry faces is employment. Qualified people to run and build machines are becoming a rarity, and the schools are not teaching the tradesmen and women like before. The concentration on going to college, IT and the medical fields has taken a bite out of the trades. The kids also have been exposed to video games and computers at an earlier age, which creates a generation of “indoors men” that is crippling many industries.

However, Zagar is committed to continued success by reaching out to trade schools in the area, creating relationships with them and planting seeds in the heads of the kids to let them know that a manufacturing career is not a bad thing. The company also reached out to trade organizations and local chambers of commerce to help create positive relationships toward the success of the industry. As the industry drives toward a high-technology, advanced-manufacturing future, companies need to prepare for the need.

When not working at Zagar Inc., Gary Zagar, is an avid golfer and dad. It is all he has time for. He is inspired by positivity -- looking forward to life and to good things, in general, instead of the constant reporting of negative and the plight of the world. He strives to be, and encourages others to be, the light of the world to inspire positive things in other people. He enjoys being outside during good weather and loves commerce and learning about everything. He says, “Life is so interesting, and I love it.”