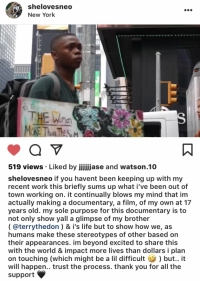 Neo gives an appreciation to the aupport he has recived while showing a glimpse of the work Terry is doing in New York.

Last spring Terry, an incoming senior this fall, took “a break” from his job at Chipotle on Lakeshore and Neo, also an incoming senior, quit his job as a party host a SkyZone. As a responsible adult all I could think about was how foolish of a decision that was. But they kept saying the same thing over and over. “Trust the process”.

As I saw their hobbies turn into passion and their passion opening doors, I was beginning to be able to trust the process.

Terry and Neo are best friends turned brothers two years ago when Terry came to stay with us. This past school year they both have had a revival of sorts regarding their natural talents and gifts. Neo has been taking photos at every opportunity. He has done photo shoots with his school friends, proms and graduations. Then he branched out and started working in a studio with some professionals who could see his raw talent. Those trained eyes decided to mentor him and help him grow in the areas they could recognize that he needed to grow. This inspired Neo even more to include pursuing videography and directing film.

Terry is an artist. He has always drawn in journals and sketch books since he was a young child and would mainly use pencils and markers until earlier this year his art teacher exposed him to other mediums. She pushed him out of his comfort zone and introduced him to a variety of methods. Every material Josh has placed in his hand, he has excelled with. Watercolors, acrylics, pen and ink, charcoal, the list goes on and on. His strengths are illustrating the human face and capturing raw emotion. He has his own unique style that again, comes naturally.

Since the boys had more free time on their hands, they utilized that time to educate themselves in their crafts and create some beautiful pieces of art. They also had many conversations about our culture and the social aspects of our society and then they birthed the idea that they wanted to do something BIG.

The boys decided that they were going to go to New York City to have Terry paint live in the streets dressed as individuals from different social classes all the while Neo would photograph and film the whole ordeal to create a documentary of the whole account. The work is a study of sociology, human behavior and is an experience that they will remember for a life time.

They have encountered all sorts of personalities and individuals who they have been inspired by. They also have inspired quite a few people themselves (including locals they met along the way before they left for NY) They spent two weeks in New York City and are now doing the same experiment in Philadelphia. The boys plan to return home in the next coming weeks to prepare for their senior year in school. In September they will be showcasing the whole project including paintings, photography and the documentary at a gallery in Cleveland.

If you want to hear positive news and be inspired by these young men then follow their journey on social media.

Five year resident of Euclid. I love to highlight and share positivity especially when it comes to having pride in where you live and supporting our future generations.