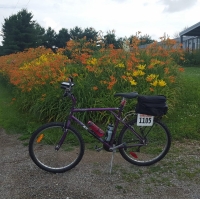 Author's bike decked out for GOBA 2018 (Great Ohio Bike Adventure), a 250 + mile tour that she completed with her son.

If you’re like most people I encounter, you might find that sharing the road with cyclists can be confusing at times.  As a person who loves both cars and bikes, traffic issues frustrate me on multiple levels. When I’m driving a car, I don’t ever want to HIT anyone who is riding a bike, just as much as I don’t want to GET HIT by a car when I’m the one riding a bike.

The good news is that Ohio already has many bike-friendly laws.  There is still a struggle, however, to get folks to conform to them – and that goes for motorists and cyclists alike.

As with anything, the first step is awareness.  Traffic laws can change from state to state and even from town to town.  This article is the first of a series intended to give you a better understanding about laws that are in place to ensure safe and efficient shared used of roads.

We’ll begin with some basics.

A bike is a considered a vehicle under Ohio law.  As such, a cyclist generally has the same rights and responsibilities as the driver of a car.  For example, a cyclist must obey all traffic signals such as stop lights and stop signs. As surprising as this may be to some, this means that group rides that practice “corking” (aka blocking) of intersections are violating the law if they do not have a permit.  Cyclists who disregard laws sabotage their own desire for progress because they antagonize their fellow citizens, who might otherwise be supportive of the cause. Look at it this way, stop lights are a good opportunity to get water and stretch. Encourage your local reps to sponsor the bigger rides and seek law-abiding people to ride with.

A cyclist must signal when making a turn and when coming to a stop.  As you may recall, we learned hand signals for slowing and turning in Driver’s Ed for when our blinkers or brake lights go out.  The same signals are to be used by cyclists. Point left for a left turn, high 5 for a right and low 5 for slowing. A cyclist may also just point right for a right turn.  Cyclists need not signal continuously. Only once is required for each lane change or turn and only when it is safe to take a hand off the handlebars (remember, we need our hands to control our bikes, including the brakes).

Bikes have certain equipment requirements.  Bikes are required to have adequate brakes and lights for when it gets dark.  Just like cars, headlights for bikes are white and taillights are red. Bike lights can be steady stream or flashing.  State law also requires a rear red reflector. Some municipalities have additional requirements. Euclid, for instance, also requires a clear reflector in the front, wheel reflectors (clear or amber in front/red in the back), a bell and a helmet if the rider is under 14.